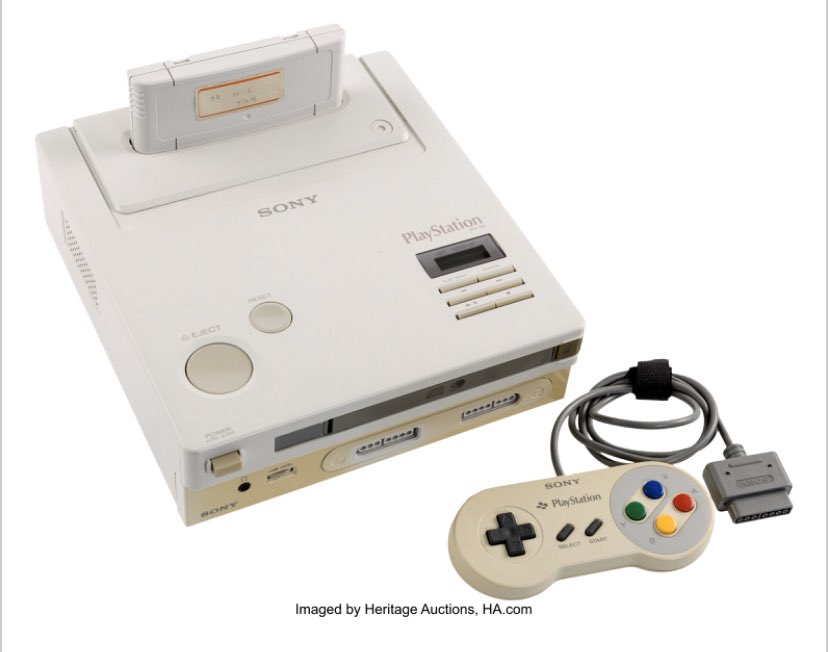 In the 1990s, Nintendo and Sony collaborated on a new game console. Nintendo quit the deal suddenly, one of the greatest business mistakes in video game history. Sony developed and released its own version of the PlayStation console, to spectacular success.

But there was a prototype "Nintendo PlayStation", and the working device is up for auction. It's going to go for a lot of money; bidding is already in the five figures.

Nintendo Play Station Super NES CD-ROM Prototype - Sony and Nintendo c. 1992. At one point, this dual-branded prototype's existence was mere myth, and this is the very first time it will ever be offered at public auction. It is said to be the last remaining prototype of the alleged 200 that were forged from the failed joint-venture between Sony and Nintendo, two of the biggest competitors in the home console video game market. Reportedly, the other prototypes have since been destroyed. We at Heritage can attest the prototype is working, as we've played a couple of rounds of Mortal Kombat on it using a Super Famicom cartridge.

The prototype does share some exterior similarities with both the Super Nintendo and the Sony PlayStation, but it has its own, unique characteristics as well. It has not only a slot for Super Famicom and Super Nintendo games, but a CD-ROM drive that was meant to play disc-based media and presumably video games as well. Though the CD-ROM drive was not currently working when it was found in 2009, it has since been repaired by Benjamin Heckendorn, a YouTube personality known for his console repair videos. It now has the ability to play music CDs like the commercially produced PlayStation, but there is no proprietary software that's known to have been made during the prototype's development.