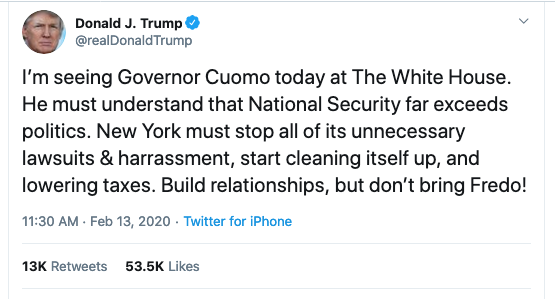 Today, impeached president Donald John Trump did another bad thing right out in the open.

And I'm not even talking about the dumb 'The Godfather' joke.

On Twitter, he said New York “must stop all of its unnecessary lawsuits & harrassment” if state residents want the ability to apply for 'Global Entry' status with the Department of Homeland Security. The program, which costs $100 to apply for, enters you in a federal database and allows you to go through TSA airport screenings quickly and with a little shred of your dignity sort of intact.

This quid-pro-quo, this-for-that tweet is super wrong and seems against the law? But nothing matters.

Here's how the former director of the Office of Government Ethics responded.

Holy cow! He appears to be engaging in another quid pro quo right before our eyes. I don't know what to say but HOLY COW! NY must drop its lawsuits against him if New Yorkers want Global Entry status? HOLY COW!!! HOLY COW!!! https://t.co/4NPUgc9LNt

Again, here is what President Trump is demanding in the screenshotted tweet above: the governor and law enforcement entities of New York, a state which was his residence until very recently, must stop investigating Trump family crimes if New York residents want to receive federal services.

Also -- Trump appears to believe that Cuomo, the governor, is responsible for filing these lawsuits against Trump.

The state attorney general is, you big dummy.

When you stop violating the rights and liberties of all New Yorkers, we will stand down.

Until then, we have a duty and responsibility to defend the Constitution and the rule of law.

BTW, I file the lawsuits, not the Governor. https://t.co/tsOLeEgiQp

More observations from legal minds and reporters, below.

New York’s AG just sued the Trump administration for the 35th time since Jan 2019, this time b/c he rescinded global entry status for NY travelers. That’s one lawsuit every 11.6 days. If Trump stops breaking the law, I’m sure they’d happily stop suing. pic.twitter.com/2ePa2z1eK2

Of note, the Trump admin announced the suspension of the Global Entry program for New Yorkers the same day Trump was acquitted of impeachment charges https://t.co/p4DKEs26vh

If Trump reverses the Global Entry freeze on New York, Gov. Cuomo said he'll give immigration agencies access to some driving records from the DMV database

“I’m cooperating. Will you now stop doing what you’re doing, which is gratuitous and retaliatory?” https://t.co/chMB1wWgFu pic.twitter.com/yUMYIEuVqS

Business / new york / politics / right out in the open / trump