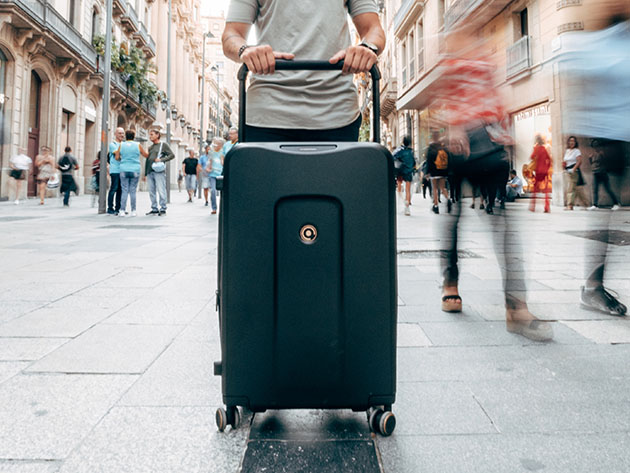 You’d be surprised anyone would have to say this, but...there are plenty of items that don’t belong in a suitcase. Like a bag of dead birds. No, really...people are actually packing bags of small dead birds into their luggage these days.

Look, we can’t tell you how to pack. That’s your business.  But we can recommend this — if you’re carrying animal remains on international flights, we suggest you get new luggage afterward. That’s pretty self-explanatory, right?

No matter what you’re lugging around, we pulled together 10 great luggage and luggage set options for those looking to add to or replace their current bags. Right now, throw in the code PRESIDENT15 during checkout and they’ll also take an extra 15 percent off your total.

Unless you’re a Kardashian, most of us can get by with just one roomy, sturdy bag for most short travel. But if you’re moving quickly through crowded air terminals or train stations, a solid spinner bag can be a lifesaver. Genius Pack has deals right now on a pair of great spinners.

The Genius Pack Aerial Hardside Carry On Spinner (135.15 after discount, originally $298) is sized exactly to fit most airlines’ carry on size, sports 360-degree durable wheels, and, at just over 6 pounds, is incredibly light for such a sturdy bag.

Meanwhile, if a carry-on isn’t enough, the Genius Pack 30" Spinner Upright Suitcase ($169.99 after discount, originally $398) will let you maximize your space with the same high-quality spinner wheels,  Laundry Compression Technology to keep dirty clothes compact and separate and even an extra 2 inches of expandable room for cramming that last bulky coat in at the last second.

As for the Rollux 2-in-1 Expandable Suitcase ($191.24 after discount, originally $349), it’s the best of both worlds. It collapses to a carry-on size for short jaunts (or for easy closet storage) or expands to full-size check-in suitcase dimensions for trips requiring a little more room.

You may not have heard of Plevo before, but the upstart company is building quite a reputation for themselves in the Kickstarter world as makers of the world’s most innovative smart luggage. Sync up one of their bags with the Plevo app and your luggage instantly has a brain of its own, including built-in weight sensors, GPS location tracking, distance alerts, a removable battery pack and a smart lock that opens by either face or touch ID or morse code (yep!).

Of course, sometimes a single bag just isn’t gonna cut it. For families or longer trips, the Tanka Engine Hard-Side 3-Piece Spinner Luggage ($191.24 after discount, originally $250) sports three 20, 24 and 28-inch bags with their own 3-dial combination locks and four double spinner wheels each.

If you’re worried about maneuvering multiple bags to your destination, the Tach Tuff Connectable Hard Luggage Set ($233.74 after discount, originally $475) has their patented TACH connecting system that allows up to fasten up to nine bags together in one individual solid unit. They’re like the Transformers of luggage.

And if durability is your thing, the J World DIA Polycarbonate Luggage Set ($305.15 after discount, originally $400) should make you happy. The polycarbonate shells on this 3-piece set flex and absorb impact so none of your items ever suffer damage from...overenthusiastic airport baggage handlers.