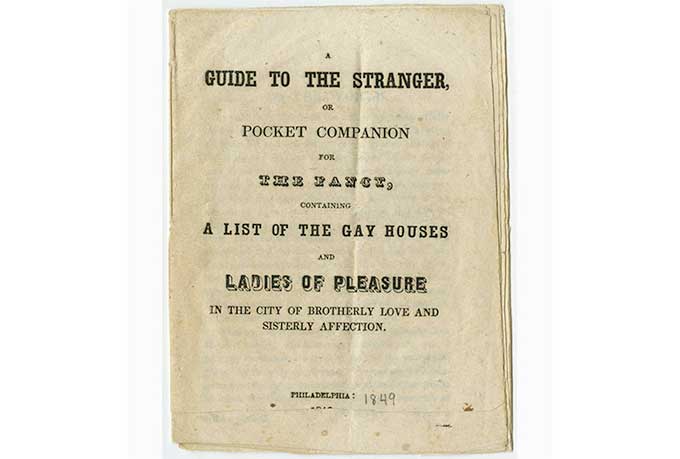 Philadelphia had many "gay houses" and "ladies of pleasure" in the 1840s, so it's not surprising that an enterprising publisher created a guidebook for travelers to the city "of brotherly love and sisterly affection," which was estimated to employ 10,000 sex workers at the time.

Flashbak has some highlights from the "pocket companion."

At this house you will hear no disgusting language to annoy your ear; everything connected with this establishment is calculated to make a man happy. The young ladies are beautiful and accomplished; they will at any time amuse you with a fine tune on the piano, or use their melodious voices to drive dull care away. Stranger, do not neglect to pay a visit to this house before you leave our quiet city of sisterly affection.

This lady is the Queen of Trumps, tall and majestic, and noble in appearance. She is a lady in manners and conversation. She lives well and her house is comfortable and safe. One glance will satisfy a person of that fact.

…be cautious when you visit this place, or you may rue it all your lifetime.

Beware this house, stranger, as you would the sting of a viper.

This is one of the worst conducted houses in the city. The girls, though few in number, are ugly, vulgar and drunken. We would not advise any body of common sense to stay there.

Brandi Campbell is a sex worker, specifically a stripper. Since 2016, she’s also run a blog for Stripper Labor Rights, that includes resources for other sex workers who want to protect themselves from exploitative labor issues. In 2018, Campbell had been working at the Centerfold Club in Columbus, Ohio. Although she was technically an independent […]