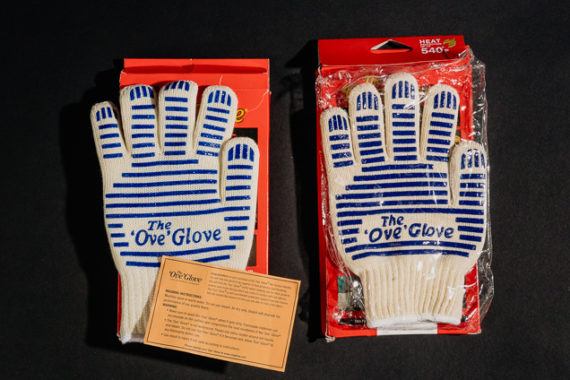 Can you tell which of these products is counterfeit? Wirecutter had manufacturers send them the real thing, then bought the same item from Amazon. There were, of course, differences to be found.

The counterfeit glove, which we purchased from this Amazon page from a third-party seller, looked almost identical to the real thing, with near-perfect packaging. The major differences:

• The real glove’s blue lines were cleaner, and there was a tag inside with material information as well as a loop for hanging. The fake glove arrived with a snag in the weave.

• The heat protection was slightly better on the real glove, which was thicker and had a longer wrist. The fake glove’s painted-on lines gave off a melted-plastic smell when we used it to hold a heated cast-iron pan for 10 seconds.

• The real glove cost us $5 more than the fake glove, a 50 percent difference.

The troubling upshot is that many counterfeits are nearly as good as the real thing, not least because many of them are corners-cut "third shift" clones from the real thing's contracted manufacturer.

Note that it's virtually impossible to find the official Ove Gloves site through Google. The top result is the Amazon counterfeits, trailed by brick and mortar store sites such as Walmart and Target.