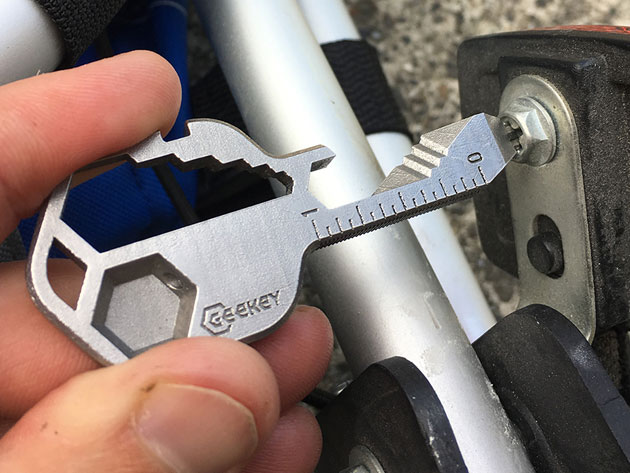 Admit it...even having a pocket knife within reach at a moment’s notice makes you feel a little like James Bond, right? Like, if you run up against a locked vault or a sinister superweapon, all you’d need are a couple of hand-held tools to diffuse the whole situation and save the world.

Look, we don’t recommend trying to disable a bomb with any of the 10 cool pocket knives and multi-tool gadgets in this assortment, but they do offer some peace of mind in a jam.

Is there a more badass a feeling than knowing you’ve got a blade hanging around your neck? This Kickstarter-funded survivalist dream is a military-style lightweight dog tag with its own key-sized blade. The 1-inch blade can even be removed and re-inserted to create its own blade and handle set-up for added versatility.

A pocket knife with a decidedly Japanese feel, the Pocket Samurai folds together the popular higonokami knife style into this portable package. With a razor-sharp tanto style blade, pocket clip and keychain loop, it’s super handy.

They say the pen is mightier than the sword, but what if you could have both? This stainless steel blade and tungsten carbide window punch can handle all your on-the-spot cutting, all while housed in the body of a pen that can write in any conditions, even on wet paper.

It may look like a key, but this highly-adaptable little gadget is as multi-faceted as they come. With a scoring tip, serrated edge, as well as varying wrench and screwdriver uses, it can cut boxes, split knots, scrap, tighten or do just about anything. You can even use this thing as a pipe. Seriously.

A cyclist card is just that: a tool that fits in a wallet card slot and can help bail you out of innumerable road situations. With a tire pry, hex wrenches and a truing fork among its more than 43 functions, it might be just the tool to fix a seat, adjust a brake or just keep you riding through trouble.

Sure, it’s got 7 wrenches, a bottle opener, a wine stripper and more built-in, but the real calling card of the EverRatchet is that patented ratchet feature applying up to 20 lbs. of torque in tight spaces or limited visibility.

With Phillips, Torx and flathead screwdriver tips — six in all — this star-shaped tool is engineered for your quick fix-it chores. Tips attach magnetically for easy use and the ceramic bearings inside create smooth spinning services to get your job done.

The KeyBar is a key organizer...which doesn’t sound very sexy until you start checking out what else this integrated multi-tool can do. Load in the keys you need or the attachments you want to use like scissors, belt tools, magnets, flash drives and more, and it’s literally the tool built just for you.

It’s the size of a credit card, but this thick-gauge, extra-durable stainless steel helper serves as a knife, saw blade, screwdriver or a trusty 2-position, 4-size, butterfly screw or directional auxiliary wrench. It even comes with its own protective case (not that it fears much.)

Bottle openers are always useful, but they’re often too bulky to carry on a keychain without weighing the whole thing down. However, the titanium Pry.Me is the world’s smallest bottle opener, made to hold up to 164,000 times its own weight (strong enough to pull a car), open bottles with a flourish, all while being smaller than a penny.