Here’s your last chance to win a new iPhone 11, plus a bunch of cool gadgets to go with it 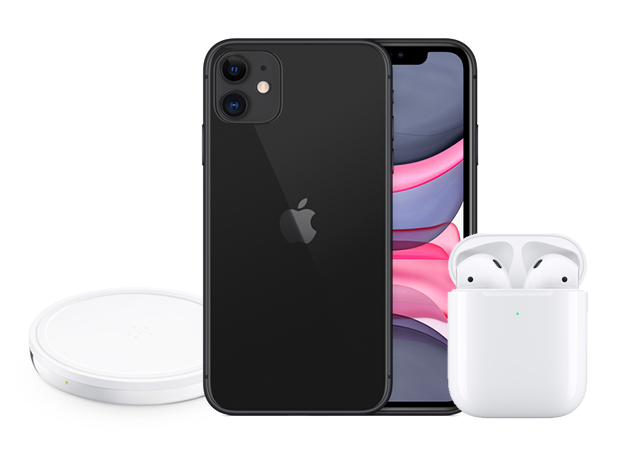 First off, we wanted to give you one last reminder that we’re holding on to an iPhone 11, a pair of AirPods and a Belkin wireless charging pad, all with your name on them. They’re free — and they’re just waiting for you to make a move. All you’ve gotta do is enter the iPhone 11 giveaway by filling out the form and getting it back to us by March 9th. Be the randomly-selected winner -- and you’re instantly teched up. And it costs you nothing.

Of course, not every offer out there is basically something for nothing. Below are a handful of computer accessories that, while not being free, are all on sale at some pretty hefty discounts.

If you want to upgrade your Mac setup, you can step up to a cool new Apple Magic Keyboard and mouse tandem and save over $50. The Apple Magic Keyboard with Numeric Keypad (Certified Refurbished, $99.99; originally $129.99) is wireless with scissor mechanisms beneath each key for added stabilization. And the Apple Magic Mouse 2 (Certified Refurbished, $54.99; originally $79.99) tracks easier and moves with less resistance for a perfect great combo.

Power on the go is always a huge consideration, and each of these items can help make sure that’s never an issue, no matter where to travel.  If you’re short on outlets, the HyperGear 3-in-1 Multi-Charger, Holder and Nightlight ($19.99; originally $29.99) has two grounded outlets and 2 USB ports and it even holds your phone while it charges.

When the outlet itself is an issue, the World Travel Plug Adapter ($24.99; originally $34.99) brings six different attachments to the table to convert any outlets from 200 different countries into proper power sources for charging up to five devices at once.

If you need more, you can have more with the Power Tower 6-Port USB Charging Hub ($16.99; originally $59.99). This tower with 6 high-speed USB ports can tackle power needs for the entire family at up to 85 percent faster than regular chargers.

Finally, there’s the EVRI 80W USB-C Charging Station ($52.99; originally $74.99), packing four Qualcomm Quick Charge 3.0 ports to supply up to 80 watts of power, enough to charge any USB-C laptop out there today, including the MacBook and MacBook Pro.

Before you know it, every device will charge via wireless charging, so you can get ahead of that trend with two Naztech power hubs. The Naztech Wireless Power Hub 5 ($44.99; originally $54.99) sports four USB ports as well as a Qi-enabled pad to power up your iPhone or Android device at twice the speed of other wireless chargers off a single AC outlet. But if you aren’t near an outlet, the Naztech Ultimate Power Station ($49.99; originally $59.99) not only does wireless charging and supports five USB ports, it also has its own ultra-compact 4,000mAh battery built right in to do the charging for you.

Of course, getting the power you need while in the car is a whole different ballgame. Thankfully, ChargeHub has a pair of devices to chargers made for just such a situation. The ChargeHub V3: 3-Port USB Car Charger ($19.99) uses patented SmartSpeed Technology to pump 2.4 amps per port to keep the driver and all the passengers happy on long car rides.

But in case your vehicle comes with more than three seats, you can upgrade to the ChargeHub V6 ($39.99) with double the output: six hubs available for charging. It’s even got a detachable 4-port plug-in that can snake its way to the back seat, so nobody constantly clawing their way to the front for devices or power.

Chargers help facilitate power, but if you really want to make sure you’re always prepared, bring your own battery. The Extreme Boost 20,000mAh Backup Battery ($32.99; originally $89.99) not only has overcharge, overcurrent and short circuit protection features, it also packs enough punch to power up that brand-new iPhone 11 you won about four times on a single charge.

Speaking of that iPhone 11, the FusionLens for iPhone ($79.99; originally $79.99) can instantly take all your pictures to the next level. Used with the FusionLens camera app, this snap-on lens attachment can capture anamorphic, wide-angle, fisheye and 360-degree panoramic images, all without adjusting your phone’s lens position.

You can’t buy all these cool tech peripherals without something to help carry them all around. This durable 18.5-inch Incase Nylon Backpack ($39.99; originally $159.95) will easily store a 15-inch laptop and a whole lot more in that nylon bag full of extra pouches and compartments. It’s even almost 75 percent off right now to help make your decision even easier.