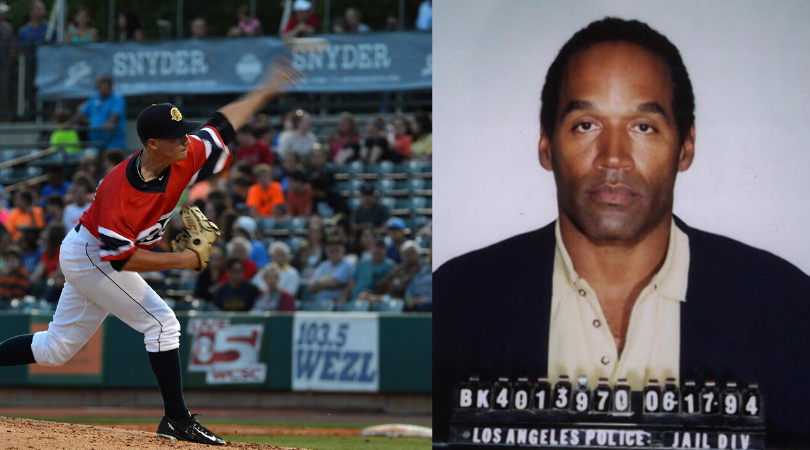 The Charleston RiverDogs are a farm team for the New York Yankees based out of South Carolina. Like plenty of minor league baseball teams, they throw a lot of themed promotional event nights to help fill the stands, including a Human Cannonball to celebrate the season's opening weekend, and a Presidential Election Bobblehead night in August.

They had also scheduled an OJ Trial Night for May 26, which they described as:

The trial of the century gets a juicy new spin. We will finally receive the verdict that everyone has been waiting for … pulp or no pulp?

Fans will act as our jury, voting with custom paddles to reach verdicts on various topics throughout the night. The eyes of the nation will be upon us. Fans will receive an “OJ Trial” shirt upon entering the stadium. If the shirt don’t fit, you must … see if we have a different size.

Perhaps unsurprisingly, an event that involves paddling and is themed around a violent criminal who "allegedly" murdered his ex-wife was received in poor taste by many a person. And alas, OJ Trial Night at the RiverDogs has since been cancelled.

I know this was the responsibility of the RiverDogs management, and likely not condoned or approved by their major league affiliate franchise. But it does remind me of an old New England adage: "Fuck the Yankees."

Major League Baseball announced its new rules driven by COVID-19 health and safety requirements. Notably, spitting is banned! I’d imagine that this will be tough to enforce—spitting in baseball is as American as, well, baseball. Here’s the rule: • Spitting is prohibited (including but not limited to, saliva, sunflower seeds or peanut shells, or tobacco) […]