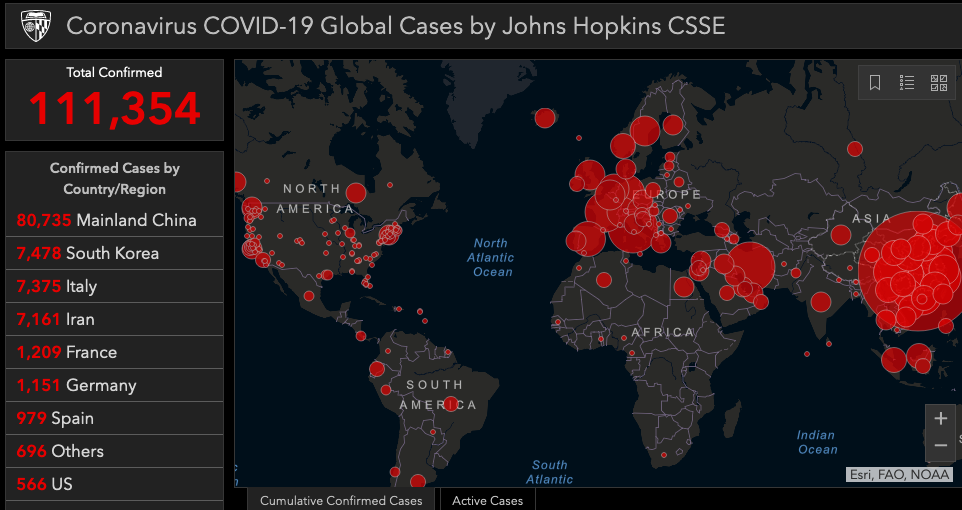 The Dow opened down 1800 points today, or -7%. It's another grim Monday in financial markets as the outbreak of deadly coronavirus around the world spreads fear, disruption, and economic damage.

• On Wall Street, stock trading halted for 15 minutes following a plunge at the open. This is the first time in history this circuit breaker has been triggered.

Breaking - Stock trading halted for 15 minutes following a plunge at the open. This is the first time in history this circuit breaker has been triggered

The number of people around the world who are infected with coronavirus is now over 110,000, and over 3,800 have died, according to a Reuters tally of government announcements.

• Separately, prices for crude oil droppped by as much as a third after Saudi Arabia kicked off a fuel price war with Russia.

• Investors already freaked out by COVID-19 sought safety in bonds and yen.

So, things are fine. Just fine. Excerpt from Reuters:

Heavy selling was set to continue on Wall Street with U.S. futures EScv1 hitting their down limit. Investors drove 30-year U.S. bond yields beneath 1% on bets the Federal Reserve would be forced to cut interest rates by at least 75 basis points at its March 18 meeting, after having already delivered an emergency easing last week. “Wild is an understatement,” said Chris Brankin, Chief Executive at stockbroker TD Ameritrade Singapore.

The number of people infected with the coronavirus topped 110,000 across the world as the outbreak reached more countries and caused more economic carnage. Most of Italy’s stocks failed to open after the government ordered a lockdown of large parts of the north of the country, including the financial capital Milan.

There were also worries that U.S. oil producers that had issued a lot of debt would be made uneconomic by the price drop.

• In Italy, Prime Minister Giuseppe Conte today vowed to implement “massive shock therapy” to counter the impact of coronavirus, after the government shut off much of the country’s industrial and business region in the north to slow the spread.

• Here's a list of the airlines around the world curtailing or stopping flights altogether because of coronavirus.

Gary Cohn says he believes that the US government is going to need to step in and support certain industries as a result of economic damage from the virus.

BREAKING: U.S. market trading halted for 15 minutes after S&P 500 trades more than 7% lower at the open

The market has triggered a "circuit breaker" that keeps stocks from falling through the floor. Here’s what you need to know. https://t.co/77vZ8Q6oFz pic.twitter.com/QAoCPpH1Qz

Sad to see that the entire financial sector has joined up with the Deep State in order to hurt Mr. Trump