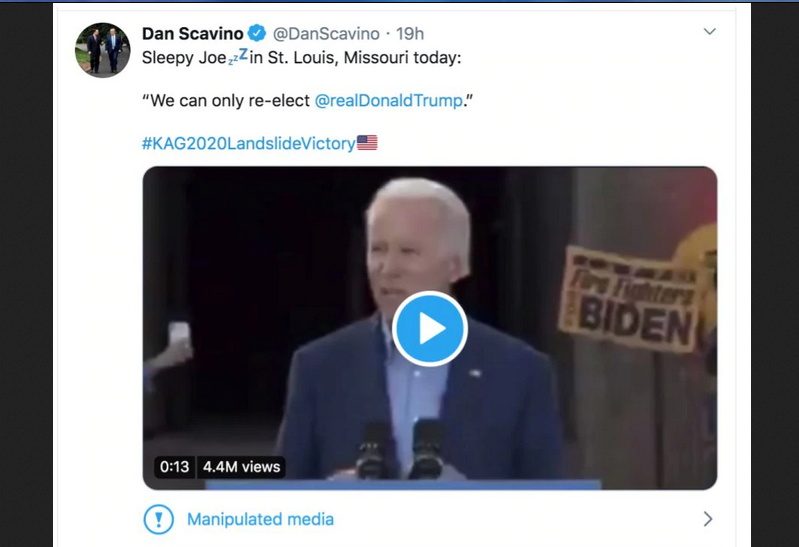 It's about freaking time.

In what appears to be the very first time Twitter has enforced its new policy to fight political disinformation in the form of doctored videos and photos, the social media network FINALLY applied its “manipulated media” label on a misleadingly clipped video of Democratic presidential candidate Joe Biden which was shared by impeached and manifestly corrupt U.S. president Donald J. Trump.

The video was shared by White House social media director Dan Scavino then retweeted by Trump, reports Cat Zakrzewski at the Washington Post:

The version of the video shared by Scavino showed Biden stumbling on a line during a speech, then saying: “Excuse me. We can only reelect Donald Trump.”

But the edited video deleted the second part of the former vice president’s sentence. The whole thing said: “Excuse me. We can only reelect Donald Trump if in fact we get engaged in this circular firing squad here. It’s got to be a positive campaign.”

Twitter applied the label to Scavino’s tweet about 5 p.m. Sunday, about 18 hours after Scavino shared the video. The video had at least 5 million views and more than 21,000 retweets as of Sunday evening.

Twitter’s rollout of the label was not without technical glitches, however. The label was not showing up when people searched for Scavino’s tweet, though Twitter spokeswoman Katie Rosborough said it was appearing in individuals’ timelines. She added that the company is working on a fix.

Sadly it looks like manipulated/fake media in this election cycle is just as likely to come from the White House social media director as it is from Prigozhin's troll factory. https://t.co/u8st2lRsw1

Just in: Twitter applied its new manipulated media label for the first time to a deceptively edited video of Joe Biden. It was shared by White House social media director Dan Scavino, and retweeted by the president. pic.twitter.com/PggcCwMNkx

The @JoeBiden campaign is putting Facebook on blast after a misleading video of Biden retweeted by Trump was labeled by Twitter as “manipulated,” but not by Facebook.@schultzohio going so far as to call Facebook’s lack of action a “national crisis.”

We’re seeing an intentional and coordinated effort by established gatekeepers to equate political speech they don’t like with the entirely separate categories of doctored deep fakes, illegal content, and deceptive cheap fakes. https://t.co/mKTf9hzi5O

The original video shows Biden encouraging Democrats to unite, “we can only re-elect Donald Trump if we get engaged in this circular firing squad, it’s got to be a positive campaign.

I’m extremely disappointed about how many social media “friends” shared this. Then argued when I said it wasn’t real. Now I have credible proof and they still don’t believe it. https://t.co/5nOKRISclB

‘Twitter applied the label to Scavino’s tweet at about 5 p.m. on Sunday evening, about 18 hours after Scavino first shared the video.‘ https://t.co/mCgHCzjTzZ

Here's the full quote the edited video leaves out:

"Excuse me. We can only re-elect Donald Trump if in fact we get engaged in this circular firing squad here. It's gotta be a positive campaign."

Biden called for an end to "negative attacks" in the primary with Bernie. https://t.co/GFhPvydnCX

Trump and his campaign promoted a video edited flagrantly dishonestly to wrongly make it seem Biden had accidentally endorsed Trump. Some pro-Sanders tweeters did too. The video has now been viewed more than 6 million times. https://t.co/2f6pq29JO1

Even I fell for this one and thought Biden had really said the clipped line of the edited video. Apparently it was just a pause in the sentence. Guess we better get ready for a rough eight months online. 🙄 https://t.co/C7sVWzhsnD pic.twitter.com/wFocdD3nio

For the first time, Twitter applied its new “manipulated media” label to a deceptively edited video.

FCC Commissioner Carr is using his official government account to attack a private company (over which his agency has *zero* jurisdiction whatsoever) for enforcing its own terms of service ban on deceptively edited videos because it did so against the president who appointed him. https://t.co/WfIu0rgXDJ

WaPo reporting Twitter added a manipulated media label to something Trump retweeted, but it's not showing up for me. Left is what it should look like. Right is what I'm getting.https://t.co/NEKKe8awpC pic.twitter.com/Ol2S7HpkOu