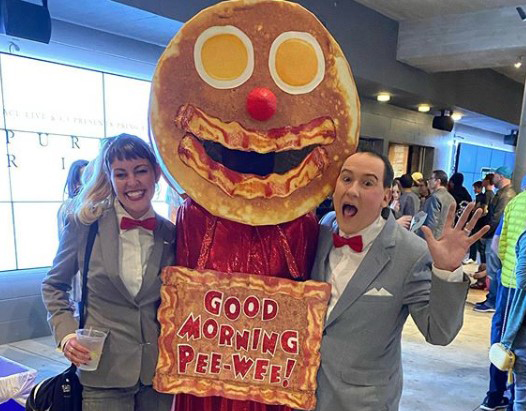 — Electric vibe. Our phones were locked in a pouch for the event (not a biggie), which made us all really present. You could practically see the crowd's anticipation in the air;
— I won't spoil the surprise but the special pre- and post- movie footage made my eighties-lovin' heart burst with joy;
— The film absolutely stands the test of time — no question. In some ways, it felt like I was seeing it for the first time, spotting things I had never noticed before;
— It was a real happening. Folks were yelling out lines, singing, and hissing (at antagonist Francis Buxton, of course). much like a screening of Rocky Horror;
— Some fans wore costumes inspired by characters in the Pee-wee universe, everything from Big Adventure to the Playhouse (more on that below);
— Fun selection of merch, including some adorable Big Adventure candy hearts;
— and last, but by no means least, the stories Paul told about the making of the film were terrific and inspiring! And I think he would have been happy to tell lots more if the venue didn't need to close for the night (He did reveal that a memoir is in the works).

— There's no intermission during the roughly four hours of the event (which really just means you need to plan a pre-show bathroom break because you won't want to miss a thing);
— My face literally hurt from laughing so hard and I gave myself a headache from all the excitement.

Truly, those are my only "complaints," as the entire evening was entertaining from soup to nuts. Top notch.

Now for some photos…

All 6 of us Yada siblings, plus our brother-in-law and 9-year-old niece got to see Pee Wee's Big Adventure on the big screen with a lively crowd and appearance by Paul Rubens!! This is huge because for 35 years we have been quoting this movie and would watch it constantly on VHS. I made Shrinky Dink earrings and buttons for us and Allie dressed up as She Wee Herman! We threw yarn at the scene when Pee Wee loses it in his basement ("aaand knitting aaaaand knitting aaaaaand knitting…") and we threw rubber snakes when he rescued the real snakes from the burning pet store. We got scolded by security (heeeee)! Michael may or may not have put on a blond wig during the Twisted Sister scene but our phones were locked so there's no evidence. So fun seeing everyone there and at the Tonga Room pre-party. Horaaaay!!! #pwba35sf #peeweetour #amazinglarry

Dallas (Can you spot the Cowboy Pee-wee?):

Denver brought one too:

35-year dream come true!!! I just had to take my @peeweeherman doll, which yes, I still have in my possession! Kasi, my costume role model, absolutely killed it tonight as Mr. Breakfast! . . . . . #mrbreakfast #peeweeherman #peeweesplayhouse #austin #acllive #thehautetamale #pwba35aus #pwba35

And that Large Marge crocheted doll by Allison Hoffman (aka Craftyiscool):

That means the Large Marge you were riding with was…. HER GHOST. I spent way too long making this stop motion 🤣 #largemarge #craftyiscool #amigurumi @peeweeherman #pwba35 #pwba35aus #allisonhoffman #crochet #stopmotion @timburton @acllive

THANKS, SAN ANTONIO!! Many of you actually REMEMBERED to go to the @OfficialAlamo!! WOW! (#Todayinhistory: TODAY is the ACTUAL DAY To #rememberthealamo! https://t.co/PFyXLgSkja) #PWBA35ALAMO pic.twitter.com/iyjAixzTfV

And to dress up like Satan's Helpers biker gang:

Charo and Elvira (Cassandra Peterson) showed to one of the two L.A. shows!:

There are 12 shows (10 cities) left on the tour, starting with Atlanta this Thursday, March 12. If you're a Pee-wee Herman fan and have the means, I recommend getting to one of them before the tour's over. But, be careful, there are hoards of ticket scammers on social media, esp. on Facebook. A site like SeatGeek should be able to get your "big but" in a seat (though check the official ticket page first).

Can't make it, or just want to follow along?
— Follow Pee-wee on Instagram and/or the hashtag #PWBA35;
— Listen to Paul Reubens talk on the most recent episode of the "Conan O'Brien needs a friend" podcast;
— And, listen to the folks at Archie McPhee describe meeting Paul backstage at the Seattle show on their podcast!

Pee-wee Herman for president? SURE, WHY NOT?! Stranger things have happened. At least Pee-wee's slogan is honest: "In your guts, you know he's nuts." Go to Pee-wee's new store for the "Pee-wee for president" buttons (and tees and pins and stickers and hoodies) but stay for that terrific animated banner! Francis, his running opponent, is […]

Here's a fun collab. "Creator of cute" Jerrod Maruyama re-imagined the characters of Pee-wee's Playhouse kawaii style for a new 1000-piece puzzle. It's a limited edition/timed release, created for Comic Con. Pre-order one with a mini print signed by Paul Reubens ($65) or just the puzzle ($25). Sales for both end at 11:59 p.m. on […]

"Roosevelt's Big Adventure," a thoughtful, low-low-budget re-creation of Pee-wee's Big Adventure, is a hoot — such dedication from the entire family! A retelling if the classic 1985 movie by one of PeeWee's biggest & smallest fans – this was all his idea! Created during quarantine with what we had. (Pee-wee Herman) screengrab via doubleeweareein/YouTube