From your home to the road to your pet, these items will help improve every aspect of your life 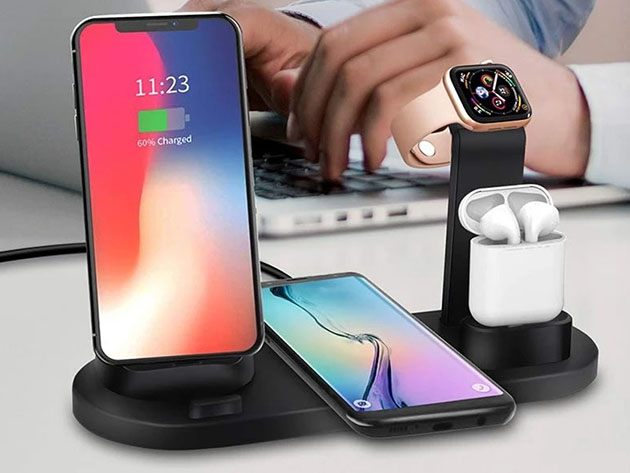 The great thing about living your best life is that it means something different to each individual. So while you may not need new socks or a fishing camera, other people are clamoring for it. To prove the point, we’ve assembled 25 of the best deals we were able to scrounge up this week. Some you’ll probably love. Others, you’ll never need. But while we all don’t covet the same things, we can all share a deep appreciation for a damn good deal.

With spring almost here, time to consider what you’ll need for getting out and enjoying a quick weekend road trip or just going out for the day and basking in the glory of the land.

The STAG Ski, Bike & Base Unit Bundle ($494; originally $549) can cart all your equipment anywhere with a roof-positioned rack set for two 40-pound bikes and four snowboards or up to five pairs of skis.

And even the youngest family members can get in some pedal time too with the Brilrider FLIGHT: World's Lightest Balance Bike ($83.95; originally $159), a tough, durable and insanely light two-wheeler that can get kids even as young as 18 months up and riding.

With a minimalist look, a bunch of useful pockets and pouches and 100 percent weather-resistant, the VENQUE Explorer Bag ($169.99; originally $199) has enough room to stow just about everything as your A-1 travel companion. And if those adventures involve some angling, the GoFish Cam Wireless Underwater Fishing Camera ($239.99) sits right on your fishing line, helping you gain valuable fishing intel and even capture footage of your greatest takedowns.

If you’re out in the world, you’ve got to take your music too, and the Spark Headphones ($29.99; originally $99) not only deliver premium sound quality, but they look crazy cool doing it, featuring earbuds and cables that glow while in use, pulsing to the rhythm of your music.

Of course, you could also focus on sprucing up your time spent under your own roof as well. When the temperatures start to rise this summer, the Star Tripod 16" Stand Fan ($359.95; originally $449) is a 3-speed, oscillating metal-bladed fan with wood legs that are a big step up from those cheap plastic box fans.

You can also add another touch of undeniable coolness with this trippy "Space Cadet" art print by Hidden Moves ($441.95; originally $552). It’s massive (48"x72") and an absolute conversation starter with any decor.

As for the bedroom, pamper yourself with a new 4-Piece Luxury 100% Rayon Bamboo Sheet Set  ($64.99; originally $249.99) that’s not only hypoallergenic, antimicrobial and satiny smooth, but like other bamboo sheets, are twice as strong as those flimsy cotton varieties.

If you’re looking to unwind after a long day, the Home Mini Humidifier Aromatherapy Machine ($17.99; originally $19.95) not only humidifies the air with more than 100 feet, it can be loaded up to deliver a calming scent throughout your home, while the 7 different LED color options cast a gentle glow all across the room.

And in case you need a little more help relaxing, the Water Free Dab Rig High Expectations ($90; originally $120) should take the edge off nicely. Without using water, this dab kit is engineered to create a smooth, adrenalized kick to your smoke with a super clever filter that both cleans and cools.

As for your kitchen, the 10-piece Swiss Diamond XD Ultimate Kitchen Kit ($535.99; originally $629.95) features pots and pans sized for all your meal prep, each with new advanced XD coating for better nonstick cooking with easier cleanup.

No home is complete without an armada of gadgets, but no gadget gets very far with having its power needs satisfied from time to time. With the 4-in-1 Versatile Wireless Charger ($40.95; originally $60), you can rotate it 360 degrees to power up your smartwatch, earbuds, a tablet and even your Qi-enabled wireless charging smartphone, all at once. The Crave PowerHUB Pro 75W 4-in-1 Device Charger ($47.99; originally $79.99) is a multi-tasker as well, sporting USB ports, a QC 3.0 port, and a PD port to charge you up on the go, even a laptop.

The HumBird Bone-Conducting Speaker ($26.95; originally $44.90) works in concert with...well, your entire home. Just place this 2-inch marvel on virtually any surface, and the bone-conducting technology helps use that surface material to amplify the sound, pumping out volume up to 115dB from this tiny powerhouse.

Meanwhile, the LutiKey Bluetooth Tracker Device ($23.99; originally $29.99) is all about peace of mind. Just attach this fob-sized tracker to virtually any person or object, sync it to your Lutikey app and it’ll instantly geo-locate the fob, no matter where it is. Hook it to your kid’s backpack and you’ll never wonder where they are again.

Speaking of protecting valuables, the award-winning Motorola Smart Safe with Secure Wall Mounting ($116.99; originally $129) not only secures your vital items but can be opened or closed from anywhere via the Motorola app and sends 24/7 alerts in the event of any security situation.

You can also spiff up your phone photos with the Lemuro 60MM Tele Portrait Lens for iPhone ($83.95; originally $104.90). This lens doubles your iPhone’s optical zoom to capture subjects from further away with a sharper focus that can make simple photos instantly look epic.

If your room and tech get an upgrade, it stands to reason your clothes and fashion accessories should follow suit...starting with your eyewear. The Stan Round Sunglasses ($15.99; originally $24) look like shades that cost hundreds more, even while offering up UV400 protection.

Stale black business socks are just as boring as boring can get -- and the DeadSoxy Boardroom Socks ($216.99; originally $270) are anything but. Made from ultra-comfortable bamboo yarn, this Executive 10-pack in a virtual rainbow of colors and designs will be the sock drawer refresher your look so desperately needs.

Of course, wearing all those socks can get...pungent, so the Gotek Portable Shoe Deodorizer and Sterilizer ($68.95; originally $99) delivers ozone and negative ion molecules that penetrate a shoe and kill 99.97 percent of bacteria, sterilizing up to 27 pairs with just one full charge.

Finally, don’t forget your best buddy with all these home and style improvements. Man’s best friend deserves some love too. And nothing says you love your dog more than a Blanket ID Tag and membership ($35; originally $43). You not only get a tag with a unique registration number for easy identification, but if your pet goes missing, the tag is activated, launching missing pet alerts, localized search parties, GPS mapping and more to get your canine home safe.

And before you laugh, consider the positive effects of the Shed Defender Original: The World's First Onesie for Dogs ($33.99; originally $39.99). Not only does the lightweight, breathable and eco-friendly mesh fabric keep a rein on unwanted shedding, it also applies gentle pressure, making dogs feel more calm, confident, and secure.