Set the mood with this designer combination lamp, Bluetooth speaker, and wine cooler 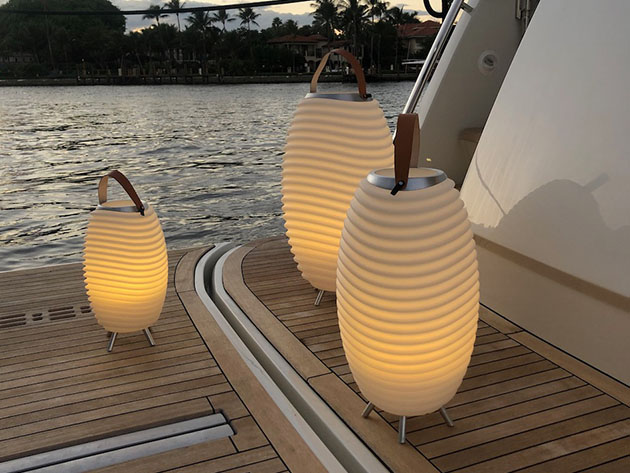 Let's go ahead and assume you never thought you'd own a lamp that can chill a bottle of Albariño. And if that lamp that's also a cooler were also a Bluetooth speaker, it's even less likely the idea crossed your mind, but here we are. The Dutch company Kooduu designed a multifunction accent piece that looks great in any indoor—or outdoor—space and gives your gathering a level of chic ambiance you didn't know was missing.

Functioning as an LED lamp with warm yellow illumination, a 10-watt wireless speaker with 180-foot Bluetooth range, and a wine cooler and/or plant stand, the Synergy Pro comes in three sizes (small and medium both hold 1 bottle of wine; large holds 2) and can be mixed or matched however you please to create a focal piece in your room or offer surround sound for your playlist.

Yup, you can DIY a whole unexpected sound system in your living room, on your patio, or in your screen house: Through the built-in antenna, each lamp can be coupled to other Kooduu products. The genuine leather handle makes it easy to move around, and the rechargeable battery boasts up to 8 hours of playtime to keep the party going all evening or ensure your sleep cast runs through the night. It can help you chill things out or pump things up, and look like artwork while doing so.