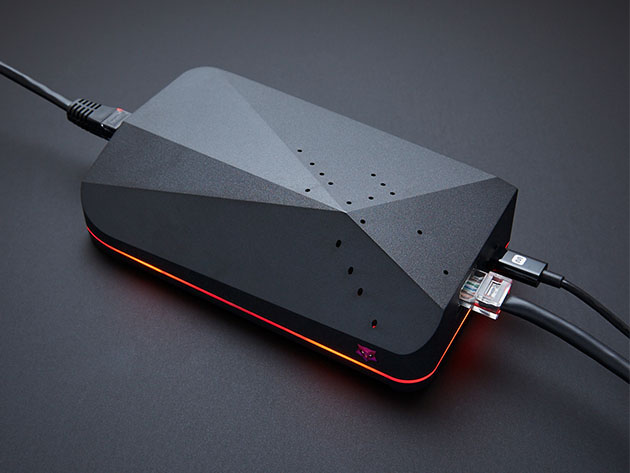 VPN protection is a necessity in this security-conscious world of ours. But many VPN deals only cover a predetermined number of devices, which means families or businesses can ultimately have a tough time making sure every laptop, tablet, smartphone, and other enabled devices all stay secure.

Syfer took a different approach to VPN coverage with the Syfer Complete Cybersecurity Router. Rather than protecting each device, this service focuses on cloaking your entire home or business Wi-Fi network, essentially throwing up a big shield over every device tethered to your connection.

This tiny black box is less than 6 inches long, but when it’s plugged in and connected to your home or business router, it works like a VPN over your entire network. All your data is encrypted, essentially making all the activity on your connection invisible to hackers or any other malicious actors trying to access your information or monitor your movements online.

And unlike other VPN services, this doesn’t just mean your phone, laptop and tablet are protected. Everything that accesses the web and can be infiltrated by a hacker is covered, from smart home systems to baby monitors to security cameras to smart TVs.

But Syfer protection doesn’t stop there. Powered by artificial intelligence and machine learning, Syfer allows you to set your own security level, ranging from basic adblocking that disrupts data collection by advertisers and digital marketers up to daily signature updates to protect your network from viruses, ransomware, malware or any other outside threats.

Syfer also employs TunnelShaper technology, which helps make sure your security precautions don’t get in the way of home streaming services like Netflix, Hulu, and others.

The unit even comes with a robust set of parental controls, allowing you to block access to questionable websites, inappropriate YouTube videos or unsafe search results from Google and other major search engines.

Normally $199, you can save $30 right now off the price of the Syfer Complete Cybersecurity Router and get the entire package for only $169.