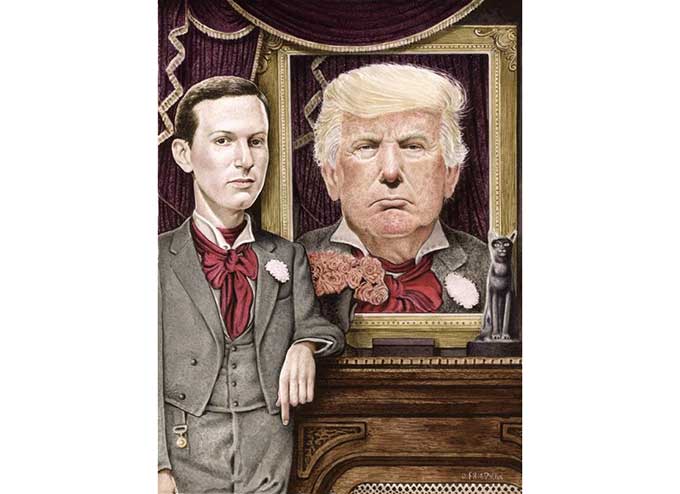 The filmmakers filmed me for the episode, sent cameras up to my my home studio to interview me about Kushner, (who I did 50 covers for back when he published the NY Observer), and also filmed me over a course of three days creating an illustration of Jared channeling Dorian Gray, with the exposed picture being his father-in-law).

A bit more on the genesis of the drawing: I had thought that Jared looked like the young, handsome, and emotionless actor, Hurd Hatfield, who played Dorian Gray in the 1946 MGM film version, and I was toying for awhile with the idea of drawing Jared Kushner posed as Dorian but couldn’t figure out a twist. One of the filmmakers suggested that Trump himself be the horrible visage seen in the aging painting hidden away in Dorian’s attic, perhaps an analogy to what his soul might someday evolve into. That clicked with me, thus the drawing.

Tom Corboy’s “Mondo Elvis” (1984) is a short, award-winning, and oddly unsettling documentary about extreme Elvis Presley fanatics after The King’s demise. From the description at Mondo A-Go Go Video’s channel: “This award-winning film takes a searing look at Elvis Presley’s most fanatic followers. Meet such devoted disciples as the twin sisters who believe Elvis […]

Built in the late 1980s, Biosphere 2 is the human habitat in Oracle, Arizona that was meant to help scientists understand how humans might live in space. In 1991, eight people went inside for two years of experimental quarantine inside the vivarium. The premise, and much of what happened, would make for a great JG […]