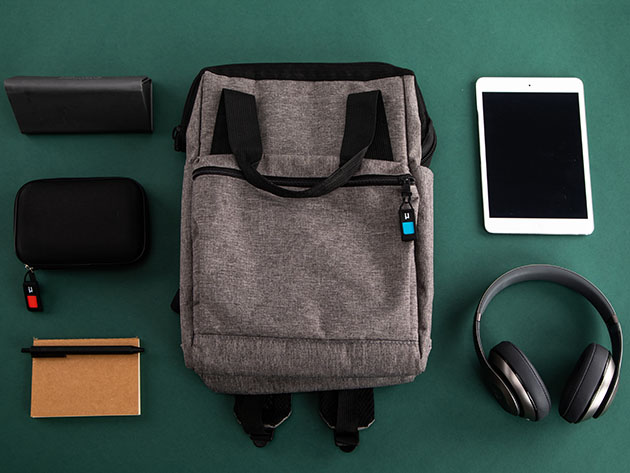 Those are just a few of the words that likely ricochet around inside your head after leaving your briefcase in a cab. Or forgetting where you put your keys. Or realizing you don’t have your wallet when it’s time to pay the dinner tab.

Hey, don’t beat yourself up. In our hyper-adrenalized world, it’s easy for stuff, even big stuff, to slip our minds from time to time. The trick is knowing you’re susceptible to silly mistakes like that and taking proactive steps to head them off before they make a tangible impact on your life.

Mu Tag is your protection from yourself. The world’s smallest loss prevention device, you can slip a Mu Tag on items you absolutely can’t afford to lose or forget — and Mu Tag will have your back.

At less than 1.5 inches long, a Mu Tag will clip or adhere to almost any item. Once it’s attached, download the Informu app, add your Mu Tags to your dashboard and you’ll be prepared in the event of an accident.

It’s synced via Bluetooth, so if you leave a Mu Tag behind, you’ll get a notification on your phone before it’s too late. If you can’t find a tagged item, the app has a built-in map that will guide you right to it. A Mu Tag only takes 40 minutes to charge up and is good for up to 3 weeks, which should be plenty of time to fix your mistake.

Once it knows your routine, you can set Mu Tag with reminders like not to forget your bag before heading out for a flight. It can also designate safe zones, so it won’t alert you when you leave your camera at home, but if you leave it out at the soccer field, you’ll get the warning.

Right now, a four-pack of Mu Tags are on sale for just $139.99, a $30 savings off the regular price. But by using the code SPRINGSAVE15 during checkout, you can save an additional 15 percent, dropping your final price down to just $118.99, less than $30 for each tag.