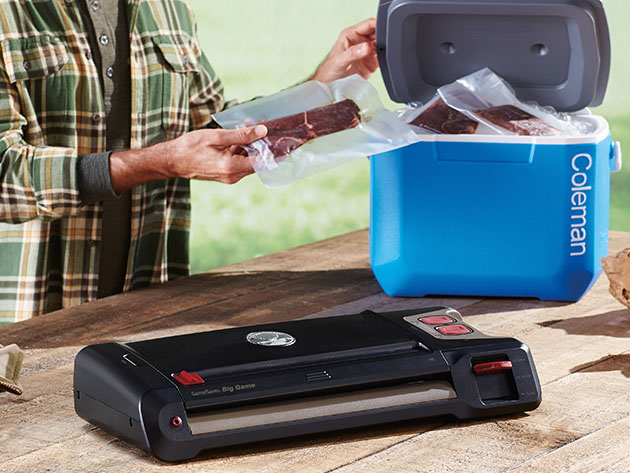 You’ve seen what’s happening at your neighborhood Costco or Target. It’s not exactly armageddon-level rioting and lawlessness...but it ain’t exactly fun out there right now either. Just trying to stock up on all the meal staples you’re looking for is taking a little more hustle, ingenuity, and good old dumb luck than it used to.

Under the circumstances, it may be wise to start considering alternatives that’ll keep your necessary foods fresher longer. Did you know a piece of meat that could survive six months in the freezer will actually last up to 3 years if it's vacuum sealed? Cheeses that might normally last a week or two in a regular refrigerator will make it as long as eight months in vacuum-sealed packaging.

Getting your own vacuum sealer is definitely a smart option -- and they aren’t all that expensive. Check out these four vacuum sealers you can pick up right now, all available with an extra 15 percent off if you enter the code SPRINGSAVE15 during checkout.

As an introduction to the bagging arts, this sealer is a great way to get started. While it’s extremely portable, the included suction cups and wall mount also make it convenient to put just about anywhere you need to fashion airtight sealed bags in seconds. Your food gets an extra lease on life, all with no leakage or spilling. With a fresh set of batteries, you can seal an average of 300 bags, more than enough to stockpile loads of essentials for the long haul.

This model from FresheTech comes with four double-gallon vacuum sealer bags, which should be enough room to store just about anything. Just adhere the Air Lock to the bag, fire it up and suck all the excess air out of the bag in under 30 seconds. It works wonders for marinating beef or fish, but more importantly, it can extend the life of your food by months.

The Gourmia is not only made from attractive stainless steel but with its stealthy internal plastic roll mechanism, you can wrap your food, then use the integrated cutter to seal it off to the perfect size with no wasted material. It works at the touch of a button and also eight special feature settings, including a rapid pickling mode that can help marinate your favorite meats in just 20 minutes.

For those times you need a heavy-duty piece of equipment to handle your bigger foodstuffs, the GameSaver Big Game Plus brings the goods. Sporting a 4.3 out of 5-star rating on Amazon, this sealer can spit out up to 80 consecutive bags back to back for over 240 pounds of preserved food. The Big game even employs new technology to easily customize bag length, reducing bag waste for more efficient storage.