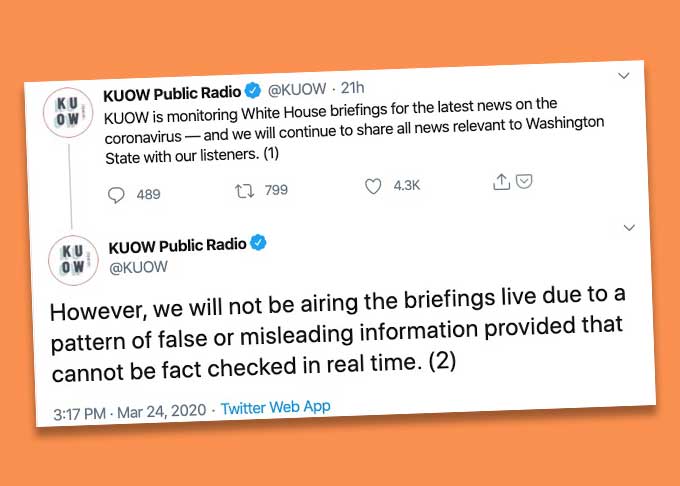 KUOW, a public radio station in Washington state announced on Twitter that it will no longer air live Trump briefings because the gentleman in the oval office is a prevaricator:

"KUOW is monitoring White House briefings for the latest news on the coronavirus — and we will continue to share all news relevant to Washington State with our listeners. However, we will not be airing the briefings live due to a pattern of false or misleading information provided that cannot be fact checked in real time."

A member of Trump's loyalty cult demonstrated his blind fealty to the liar-in-chief by telling The Hill:

“It’s not surprising, but also a failure of their duty to the American people, that some media outlets would choose to block their audiences from receiving accurate, up-to-date information on President Trump’s whole-of-government approach to slowing the spread of COVID-19,” Judd Deere, a White House spokesperson, told The Hill.

He added that “no other Administration has been as transparent and as accessible as this one, and we will continue to make sure this Nation hears from its leaders and top health experts during this global pandemic.”