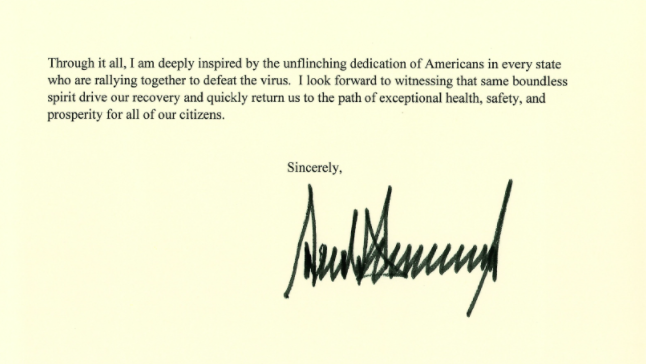 White House plans to label counties across America as "high-risk, medium-risk, or low-risk"

Impeached president Donald Trump today tells governors he plans to issue guidelines to rank U.S. counties as high-risk, medium-risk, or low-risk, and tell state and local authorities that it is up to them to decide whether to increase or relax social distancing measures to combat coronavirus.

We are in the heat of a global pandemic that has not yet peaked in the United States. This proposed approach makes no sense, and will needlessly lead to preventable deaths, according to public health officials.

In a letter to governors on Thursday, President Trump said the administration’s growing testing capabilities would enable it to publish, in consultation with public-health officials and scientists, criteria for classifying counties by risk.

President Trump in letter to governors on coronavirus says, “There is still a long battle ahead, but our efforts are already paying dividends." He says the administration is working on "new guidelines" to possibly increase or relax social distancing and mitigation measures. pic.twitter.com/QcWQg0e7G8

As testing has ramped up, it has become clear that in states like New York and Louisiana the coronavirus could have been spreading undetected for weeks.

Now Trump administration says it will use data to suggest "categorizing counties as high-risk, medium-risk, or low-risk."

In a new letter to governors, Trump said his administration will publish new guidelines on social distancing and other “mitigation measures” in place. Expand testing and then classify counties based on risk of coronavirus. Counties would be ranked as high, medium or low risk.