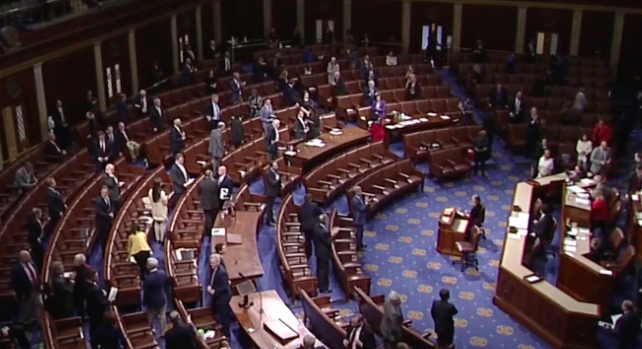 The coronavirus bill promises direct payments of $1,200 to every United States resident with a social security number who makes up to $75,000 per year.

Residents who make up to $99,000 a year will get smaller checks.

Residents who make more than $99,000, you will receive nothing.

House just passed the coronavirus bill, which will give a direct payments of $1,200 to every US resident with a social security number who makes up to $75,000 per year. < $99K will get smaller checks, > $99K no check https://t.co/aAxoxIyaMr

.@RepThomasMassie objected to the vote because of a lack of quorum. The Chair determined there was a quorum present. H.R. 748 passed by voice.

House approves the $2 trillion #CoronavirusReliefBill. It now comes here to the @WhiteHouse where @POTUS has said he'd immediately sign it. pic.twitter.com/HKZfZ7XFgM

WASHINGTON (AP) - House OKs $2.2T rescue package for virus-ravaged economy and health system, rushing it to Trump for his signature.

That’s it. In less than one minute, the relief package has passed over Massie objection

That really was an empty, dangerous and expensive gesture, pulling 200-plus people back to the Capitol #coronavirus

C-SPAN's cameras are outside the Capitol as members leave after the vote. Shouts of "Safe travels!" and "See ya later!" audible as lawmakers disperse. pic.twitter.com/fnSDtP02el

Here's another despicable comment from Massie, from a few days ago. Why is he afraid of people voting? https://t.co/3WROaNf7by

That's something you don't see every day in the House.

Massie requests a roll call so "republic doesn't die by unanimous consent and an empty chamber."

He does not have enough for a second, but objects to the chair that a quorum is present. Chair overrules, and the bill passes.

WH sources say President Trump is expected to sign it this afternoon.