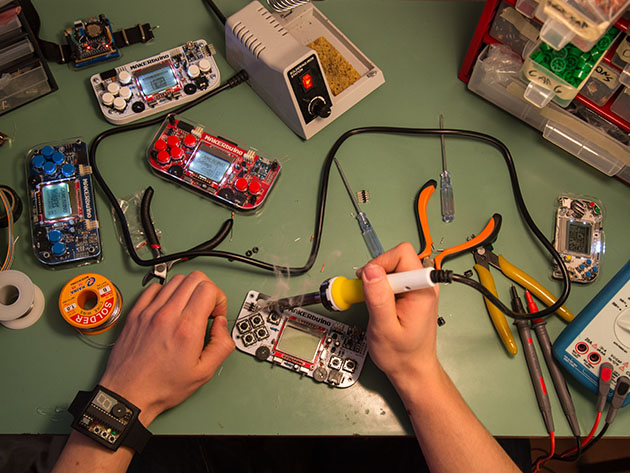 Dealing with all the COVID-19 fallout is one of the new realities of our ever-changing world — and that isn’t likely going away anytime soon. It’s also prompted a rash of existential questions for parents. Questions like how do I protect my kids? Or how do I soothe their fears?

And there’s also one of the most nerve-racking questions: How do I suddenly become an experienced elementary school teacher and actually try to homeschool these mini-terrorists I created while schools are shut down and our lives are in chaos?

Great question. If you’d like to follow the advice of one University of Connecticut professor, don’t try. We think that might be a short-sighted view. Instead, turn your home captivity into an opportunity to expand their minds organically.

Any of the DIY projects below will engage your minds, activate their problem-solving skills and super-subtly encourage a career in a lucrative STEM career so they can afford to take care of you when you’re old in style. In the short term, each should also take them hours to accomplish. Enjoy the silence.

Get ‘em started on the basics

Any curriculum starts with the basics, so if you want to get them started, you need the right introductory materials. It doesn’t get more foundational than understanding elementary circuitry, and the Circuit Scribe: DIY Circuit Kits ($32.99; originally $58.99) can kickstart their interest. Using regular paper and a steel sheet, kids will take the reins to fashion their own lights, buzzers, motors and other base-level electronics projects.

The DIY Robotic Art Kit for Ages 6 to 9 ($42.45 after discount; originally $69) is a more artistically minded avenue into robotics, letting young kids work on 10 different projects like a mini confetti cannon or a spinning robot that draws fun pictures.

Next, the DIY Coding Kit for Ages 8 to 12 ($79.95; originally $99) can introduce fundamental skill into the mix, showing kids how to incorporate programming into electronics to code, then engineer their own games, toys and other cool DIY oddities.

By now, your kid’s mind is probably starting to consider all the other amazing things they could build — and the Crowtail NodeMCU Internet of Things Kit ($89.99) should do nothing but stoke that fire. Thirty different modules and detailed lessons will have kids crafting laser pointers, rainbow lights, sensors, and a bunch more fun stuff.

From there, kids can level up their burgeoning skills with the Crowtail Starter Kit For Micro:bit 2.0 ($89.99). Here, youngsters get their hands on a BBC Micro:bit pocket-sized computer and follow the instruction to put together a host of cool projects, including robots and musical instruments.

Introduce them to parenthood

How better for kids to grasp the complexities you face than to actually show them what the rigors of raising children is actually like? So help them create life of their own with the help of the DIY Robot Curiosity Kit for Ages 8 to 10 ($99.95; originally $119). With 15 experiments focused on imparting simple robotics lessons, kids will start understanding the responsibilities of showing a next-generation robot the proper do’s and don’ts of the world.

If you’re creating life, maybe start small...like an arm. The SunFounder Robotic Arm Edge Kit for Arduino ($54.99; originally $69.99) helps teach robotic control as kids use buttons and special coding to make their robotic arm move anywhere they want and even program it to do repetitive tasks like writing, stacking or playing an instrument.

Maybe they’ll name their new creation Sloth. That’s the name given to the creation found in the SunFounder Nano DIY 4-DOF Robot Kit ($46.95; originally $59.99). Starting with a nano board, kids use electronics and coding to make their new robot move, detect obstacles, and with the included set of legs, even get up and dance.

Armed with that kind of knowledge, it’s time for a kid to literally make their own pet. The DIY Bionic Robot Lizard ($54.95; originally $65.99) gives a kid all the parts and know-how they need to build their own super cute robot lizard that can be programmed to walk, move its head and do other fun lizard-like things. All the fun of pet ownership for your kid — with none of the care, smell or aggravation for you.

Build your own entertainment

Sure, robots are flashy, but they aren’t the only projects an enterprising young STEM-centric mind can create. The Arduino Automatic Smart Plant Watering Kit 2.0 ($69.99) comes with a pump, soil moisture sensors, a water switch and more so your young farmer can build and program the system to water four plants with just the right amount of water, all at once. It’s like running a 21st-century farm, all in one package.

If watering plants isn’t exciting enough, maybe something with a little more pizazz will get their attention — like building their own handheld video game. Yep, the MAKERbuino Educational DIY Game Console ($69.99) actually helps a kid assemble all the components and modules to construct a working, open-source handheld game device that is fully customizable. And it’ll take a kid about five hours to finish — so there’s one whole afternoon you consider your parental duties covered.

If a game device isn’t cool enough, how about telling a kid they can actually build their own smartphone? The Ringo DIY Mobile Phone Kit + Tools ($179.95; originally $194.99) should really amp up the excitement, including everything needed to build a mobile phone that works. It’ll make calls, send texts, play games and more. It’s even compatible with more major mobile networks, so get your kid on your service plan and now, they’re hooked up too.

If you gave a kid a choice about what instrument they could build, the Tesla coil probably wouldn’t be high on the list. Nevertheless, just watch as this USB-controlled, music-making TinyTesla Musical Tesla Coil Kit ($197.95; originally $229.99) both fascinates and visually dazzles your kid — and probably, you.

Build your own computer

Well, technically, your kid wouldn’t build the Raspberry Pi, the single-board micro-computer that’s already assembled from the manufacturer. But the inventiveness of digging into the Pi, its open-source programming and mining all the incredible DIY projects that can spin out of that exploration is the real fun.

The Elecrow Raspberry Pi 3 Starter Kit ($108.99; originally $108) serves as the perfect jumping-on point. The kit includes the Pi itself, plus an LCD touchscreen, a WiFi adapter and a bunch of extra components so the new Pi user can dive in and start dreaming up interesting ideas.

The CrowPi Raspberry Pi Accessory Kit ($220.99; originally $239) takes that Pi exploration to new heights with an even larger assortment of awesome add-on parts, including motors, buttons, and even a camera. Step-by-step tutorials walk kids through building all sorts of neat stuff, including an even more souped-up Pi, and even start using Python, the programming language at the center of machine learning, A.I. and other amazing new computer science fields.

Of course, kids don’t care about future careers. They care about fun. And the SunFounder PiCar-V Kit V2.0 for Raspberry Pi 4 ($104.95; originally $115) is fun in a box. With some easy wiring and programming, the PiCar can be controlled via PC, phone or tablet and even has a wide-angle USB webcam onboard sending back real-time video to your device.

For the young tech-savvy artist

If your kid is more of an artist than a scientist, that doesn’t mean they still can’t get in on this bumper crop of tech-heavy learning that also stimulates the mind.

3D printing is a natural kid magnet — and the SparkMaker Original SLA 3D Printer Starter Bundle ($299.95 after discount; originally $396) is a user-friendly, first-timer printer that even a kid can experiment with safely. It also comes with different resin types, so once your kid finds or creates the right design project online, it’s simple to dump it into the SparkMaker, push the button and watch creation happen right in front of your eyes.

The 3Doodler takes 3D printing in a different, more kid-centric direction. It’s actually like a Magic Marker...if the object your kid drew with that marker could actually come to life. The 3Doodler uses heated plastic like a 3D printer, allowing youngsters to actually make their ideas into a physical, plastic form.

You can also get either the Start or Create+ as part of the Start Mega 3D Printing Pen Set ($99.95) or a Create+ Master Creator 3D Pen Set ($149.95), which include extra plastic, more shaping tools and books full of ideas for ambitious young creators.

Need to fix anything?

This one isn’t so much a tech project per se, but we guarantee your kids will be fascinated by the Bondic starter kit ($12.74 after discount; originally $24.99). Created to help fix cracked, broken or even heavily damaged items, Bondic is a liquid plastic that can actually be molded to fill in cracks or replace whole sections of your object. When you blast it with UV light, it instantly hardens like the coolest magic trick ever. Sure, it’s science...but it works like magic.