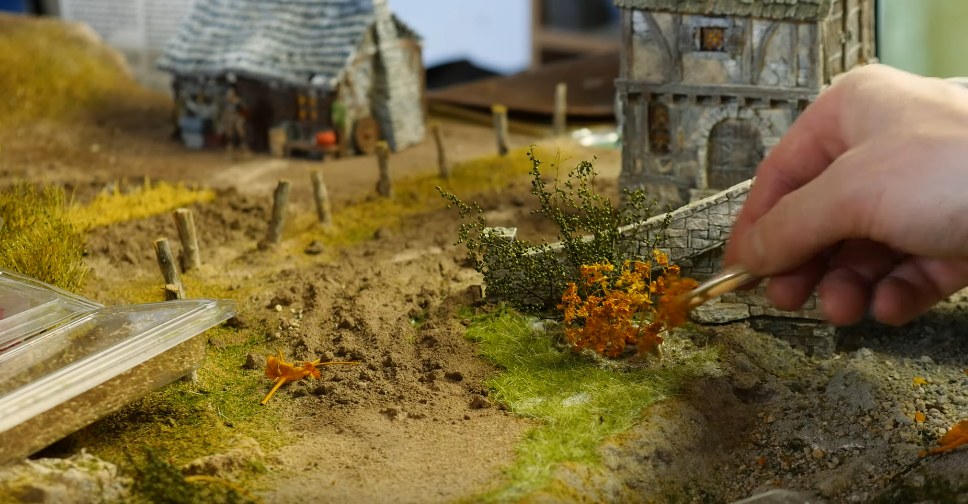 Now, Neil of Real Terrain is building a gaming board and terrain features worthy of the Tabletop World buildings that he and Brent so meticulously painted.

Here are his first two videos documenting the process. The first is of him building the actual board, the second is him beginning to add paint, the ground cover, and vegetation. These videos are something of a masterclass in terrain making.

One thing that Neil shares in the second video is a great tip for all miniatures painters and terrain makers. As he begins to put the watered down paint onto his foam rock formations (in gray, brown, green, and black), he has to remind himself that it's going to look kind of awful, like it might not be working, before he's done. This is something that often frustrates and scares newbies. Often, basecoats and early layerings of paint can look bad and you can become fearful that you're on the wrong track. As you gain more experience painting and weathering, you realize that it takes time to build up your colors, and that, for things to look realistic, you need many different colors and sometimes some of those colors look wrong when first applied. Things in nature are not a single color. Your minis and terrain look best when they have a complex of color. Even after pointing this out, Neil gets nervous in the middle of the process -- but by the end, you can see that once he has all of the elements in place, everything comes together and his rocks and ground cover look amazing. I can't wait to see the finished board.