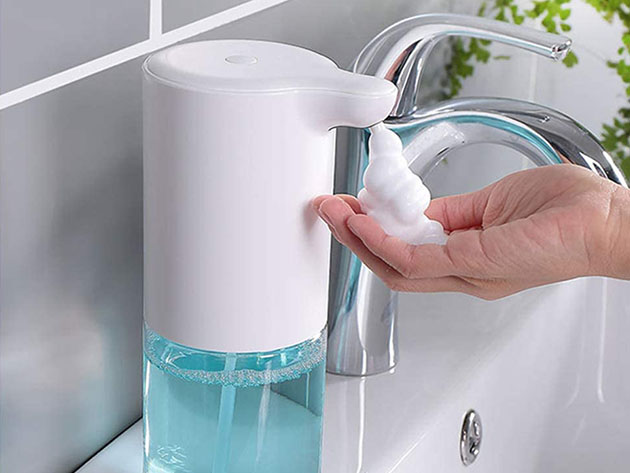 So...exactly how many times a day are you singing Happy Birthday to your sink? Unless you’re among the most germaphobic among us, it’s unlikely you ever thought the simple act of handwashing would start to take on such a central role in our daily lives.

Of course, with all the touching and such, bar soap isn’t really the best idea these days, so it might be a good time to fully step up to a sanitation process worthy of our chaotic times. And that process means -- don’t touch anything.

This hands-free foaming soap dispenser not only serves up a handful of soapy goodness when you need it, it does so with a simple swipe over an infrared sensor. There’s no need to ever push a button or force down a pump. Just like all those fancy bathrooms in expensive hotels and restaurants, a single sweep of your hand gets the job done, so nobody’s grungy fingers get all over anything.

The unit’s motor churns out disinfecting foam in a quarter of a second to prevent any bacterial transmission -- and that cool little sensor works like catnip to a kid, while also not-so-subtly reinforcing the whole handwashing habit. If you’ve got a youngster who seems to constantly “forget” to wash up after a stint in the throne room, this might just be the attention-grabbing reminder they need.

Unlike other models, this dispenser also comes with a clear plastic soap reservoir, so you can always tell exactly how much soap is left before you’re going to need to pick up some more...if you can find it, of course (maybe this guy can help).

At less than four inches across, it also won’t take up a whole lot of counter space in the bathroom, kitchen, garage or anywhere else you need to lather up.