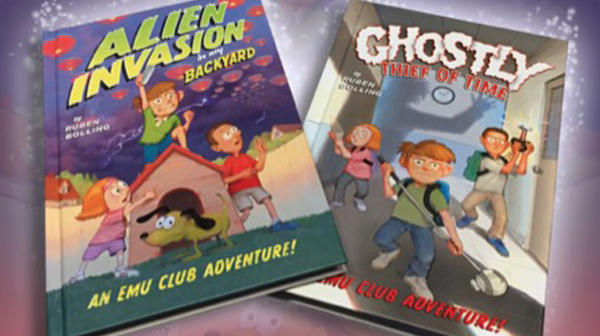 I hope these books can offer some respite, and fun and excitement, for families under the stressful conditions of quarantine. After all, they are about three bored kids who find an amazing adventure just by being exceptionally creative and curious.

Next week, check out my social media for a little project kids can do once they've finished the books.

Information on how to download both books is HERE.

Stuart Tennemeier, his best friend Brian Hrzincz, and his sister Violet want to start a mystery club like the ones they read about in books, but they have no idea how to even find a mystery in their suburban neighborhood. They settle on trying to solve a mundane mystery from their lives – what happened to the game controller they lost – and they find that when you look really, really closely at your world, you can find absolutely amazing things. And maybe even save the world.
The EMU Club Adventures series, for kids aged 7-11 (and adventurous, curious spirits of all ages), is by cartoonist Ruben Bolling, the author of the award-winning comic strip Tom the Dancing Bug.