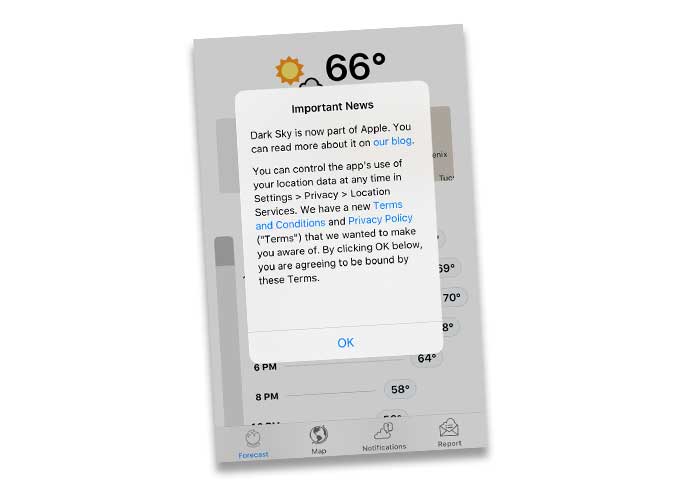 My favorite smartphone weather app is Dark Sky because it has a graph that shows you when it is going to rain, for how hard, and how long. Apple just bought Dark Sky and the first thing they did was pull the app from Android phones. Android users who subscribed to Dark Sky were informed that they will continue to receive service until July 1, 2020, after which they will be forced to throw their Android phone in the trash and buy an iPhone.

So, @apple has bought my favourite forecast provider, #darksky. Now they will:
* Leave the iOS app
* Remove the Android app
* Eliminate forecast and maps from the website in July
* close the API at the end of 2021

I think it's wrong that they have done this. pic.twitter.com/mqhjb69FYH

Just gutted that #darksky have sold out to Apple and are killing BOTH the Android app (of which I am a multi year subscriber) and their API.
This is a huge blow to open technology. All at https://t.co/sELZt8Tz99 should hang their heads in shame.

Apple buying Dark Sky is a good test for my general "acquisitions are bad" instinct: iOS having a great weather app is a good market solution, as people won't download any of the extremely shady third-party weather apps that sell location data. Discuss.https://t.co/foedReQUWQ

The Dude disappoints, watch this instead.

I recently came across a subreddit called “Expectation vs Reality.” It’s a place to post side-by-side photos of something promised compared to what was actually delivered (usually a smaller, crappier than expected). A taco I actually got from taco Bell last night…. This is supposed to make my daughter happy, not frighten her. This is […]

I’ve seen about half of these examples of products that are smaller, grosser, crappier than expected, but there are some excellent new ones in here, too.