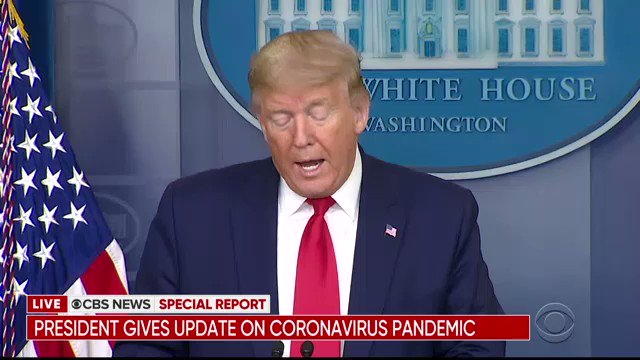 Lives will be lost because of this policy bungling.

President Donald Trump said on Friday that the Centers for Disease Control will soon officially begin recommending the public use of non-medical, non-surgical grade masks to slow the spread of COVID-19.

"You don't have to do it. ... I don't think I am going to be doing it,” Trump said about wearing a face mask, during his announcement that the CDC now recommends people wear face masks.

President Trump says the CDC is officially recommending Americans wear simple cloth masks in public, though this is only voluntary — and he says he won't be doing it https://t.co/b9FtmY5sM4 pic.twitter.com/ZX5W6IWcxA

CDC recommends that people wear masks in public, and Trump immediately undermines them by stressing that the call is "voluntary" and saying "I don't think I am going to be doing it." https://t.co/b4V0iRYicD

CDC to recommend Americans cover faces when outside, but President Trump says he won't wear one.

JUST IN: The CDC is now suggesting people wear non-medical grade masks when they're out in public. @POTUS says "individuals w/out symptoms are playing a more significant role" in the spread of the #Coronavirus. This is not a requirement, but a recommendation by the CDC #LiveOnK2 pic.twitter.com/7UmmVnI6g0

“We’re healing,” the president tells me and about a dozen other reporters. We are also, according to the CDC, supposed to wear masks, as he explains. Not the president, though. He tells us that he will not follow their advice: “I don’t think I’m going to be doing it,” he says pic.twitter.com/AZ0SuVLsOs