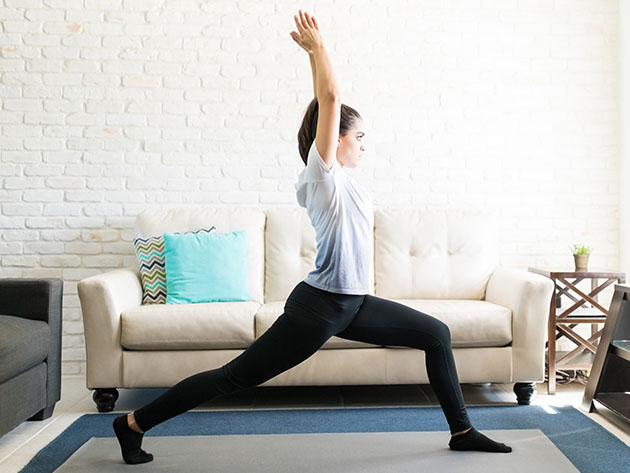 Yoga studios are closed nationwide. The irony is that between the anxieties of the outside world and those popping up inside your very own home with everyone trapped indoors, there’s probably never been a time where yoga’s calming zen was more vital and needed.

Rather than just throwing in the yoga mat and subjecting family members to very un-zen-like displays, a one-year subscription to YogaDownload can help restore the relaxed, centered you that you need to be to survive all this.

Offering up everything from increased muscle strength and athleticism and improved energy and vitality to a more balanced metabolism and a more ordered, peaceful mind, the healthy benefits of yoga were established literally centuries ago.

With Yogadownload, you can achieve all those benefits right from home with access to over 1,5000 top-rated online yoga and fitness classes to help tone up your body and tune up your mind whenever you need the attention.

Whether you’re a beginner or already an experienced practitioner, you’ll find a course that syncs with your skill level anytime you could use a session. And the sessions really do run the gamut, including courses in nearly 20 different disciplines.

You can choose from the synchronizing breathing and physical demands of Anusara yoga to the strength training of power yoga to the calm of restorative yoga to more specialized training like prenatal or beginner’s yoga. Heck, there’s even kids yoga to help those tiny terrors burn off some of that excess energy with a hearty, kid-centric routine.

YogaDownload training is available through their website as well as the accompanying app, so a complete lesson is always a click away. And as the name implies, they’re all downloadable as well, so you don’t even need web access or WiFi to feel the burn whenever you’re feeling it.

The service is already a winner with users, who have honored YogaDownload with a lofty 4.9 out of 5-star rating in the Apple App Store.

Start restoring some of the healthy energy and inner peace of a daily yoga routine with a year of YogaDownload access. It would normally retail for over $200, but right now, it’s on sale for just $29.