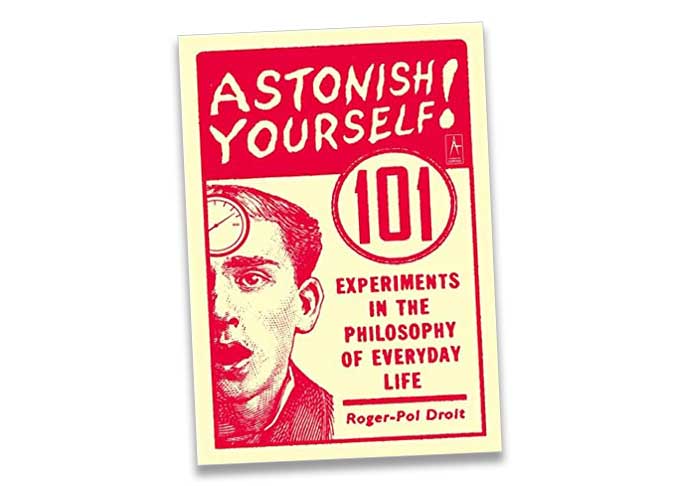 I came across Astonish Yourself: 101 Experiments in the Philosophy of Everyday Life when I took my kids to the California Science Center in Los Angeles in 2009 and found it in the gift store. It was written by philosopher Roger-Pol Droit, a researcher at the Centre de Recherche Scientifique and, as the title indicates, contains 101 mental and perceptual exercises you can perform on yourself.

In his introduction, Droit says the purpose of the experiments is to "provoke tiny moments of awareness," and to "shake a certainty we had taken for granted: our own identity, say, or the stability of the outside world, or even the meanings of words." Most of the experiments require about 20 minutes or less to complete, and often involve nothing more than merely thinking about something.

Some of the experiments you'll probably want to try when you are alone at home (like calling your name repeatedly for 20 minutes, or repeating some other word to drain it of its meaning), but others can be performed anywhere (like imagining that the world was "created from nothing, just an instant ago" and will vanish "like a light going out" in 20 minutes).

Some of the experiments you can't really plan in advance; they'll happen by accident, like when you wake up without knowing where you are -- a magical experience I love having, but Droit explains how to make the best use of this five-second-long "delicious lightness of a mystery without menace" the next time it happens: "What you do not know, for a tiny interval of time, is what the place is called, where it is, and you you are doing there. But you're certain that you are somewhere, and will find out very soon... try not to lose hold of this rare moment of perfect suspension between doubt and confidence, certitude and ignorance, anxiety and satisfaction."

One of the things I've learned from doing just a few of the exercises in this book is how hard it to stop being so busy and slow down enough to do the experiments. I don't want to stop sitting in front of my computer, playing games, reading a book, tending to chickens, tidying the house, or a million other things that tug at me, but a few minutes after getting started with one of Droit's exercises, I feel good about taking a break from those habitual behaviors.