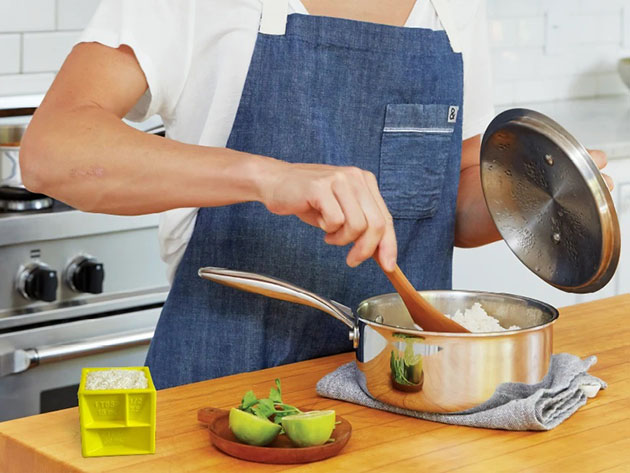 While all the downsides of stay-at-home orders and social distancing are evident, there are at least a few small silver linings to come out of all this. For many, this time spent indoors has meant a happy reintroduction to your very own kitchen.

You know your kitchen. It’s usually the place that holds all your leftovers. And it’s where the oven lives, the appliance that handles all your one-step frozen dinner heat-ups.

Of course, that’s not really cooking, is it? But for as long as we’re sticking close to home, it’s a great opportunity to try some culinary explorations we may never have attempted overwise. Cooking for real means ingredients and measurements and likely a cascade of spoons and measuring cups to get it right.

However, reinvigorated cooks can now ditch all of those extra utensils and containers for simplified ease of The Kitchen Cube All-in-One Measuring Device.

At first glance, it almost looks like a basic toddler toy, just a 3.5-inch plastic block. But this single instrument is actually an all-purpose gadget to handle up to 19 different US and metric measurements in seconds. From cups to tablespoons to milliliters of virtually all cooking sizes, the Kitchen Cube’s got you covered.

Just flip the cube to your preferred measurement, pour in your ingredient to the fill point, and dump. It’s stunningly simple, yet this basic cube just eliminated the need for all those other measuring spoons and cups that clutter your drawers and countertops and seem to end up everywhere while you’re trying to cook.

If you’ve ever had the urge to give your kitchen the complete Marie Kondo treatment and ditch all the seldom-used, unjoyful cooking junk accumulating in all those cupboards, the Kitchen Cube can help clear out a whole bunch of that stuff instantly.

The Kitchen Cube is also made from an FDA-approved food-grade plastic compound that’s entirely cooking-safe, dishwasher-safe and microwave-safe.

Right now, you can save $3 off the price of the Kitchen Cube, only $16.99 with the current offer.