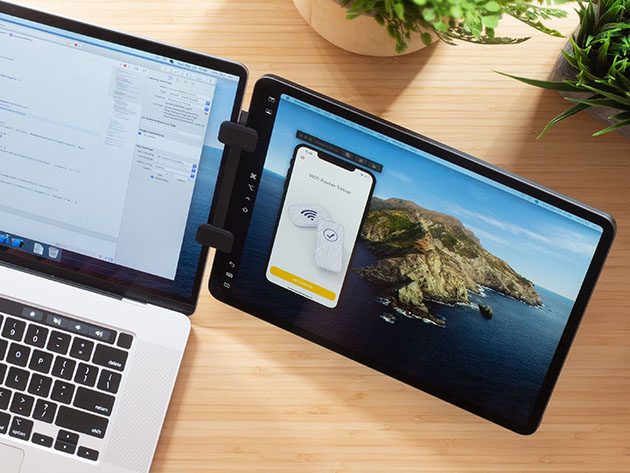 In baseball, utility players often stay employed almost exclusively because of their versatility, their ability to slide effortlessly into a variety of needed roles and remain productive. Your current tech setup doesn’t need to work any differently — except that tech items are usually created to fulfill just one purpose.

But if you want a second screen experience for your laptop, does that really mean you have to go buy a customized second monitor to achieve that goal? If you’ve got a tablet already, wouldn’t it just be easier if that could magically become your second laptop screen?

The answer is obviously yes — and that’s the principle behind the Mountie Plus, an extremely handy accessory that can help your tablet serve double duty as a seamless second screen anywhere you are.

The Mountie is a plastic and rubber attachment that easily clips your iPad or another tablet model between 5 and 9mm thick right next to your laptop screen for quick and easy access. You can leave it as a separate second screen or integrate it as a full secondary display with the use of screen mirroring software.

The Mountie is crafted to grip its hardest along the edge of the device and not on the device screen itself, avoiding any worries about breakage or distortion in your screen image.

To make sure your tablet stays charged, the Mountie Plus has created an all-new charge cord pass-through, which lets you feed the charging cord back behind the laptop monitor and out of your way, so your second screen remains fully powered without any distracting wires or cables.

Whether you want to expand your desktop for optimized efficiency or just want a complementary second screen to monitor social media or play videos while you work on your laptop, the Mountie Plus is an inexpensive, yet versatile answer.

The Mountie Plus is a cost-effective addition to help soup up anyone’s new home office tech array. Right now, you can also get one for just $31.99, a nearly $3 savings off the Mountie’s regular price.