From headphones to Bluetooth speakers, these audio deals will make lockdown more tolerable 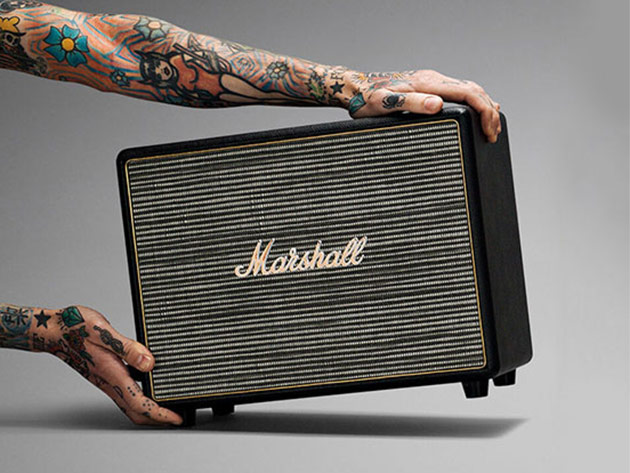 When your under lockdown there isn't always a good way to get any real separation or alone time within those close quarters. When the walls start closing in a little, there are two sure-fire ways that audio can help: either tune 'em out — or drown 'em out.

With that self-preservation in mind, consider this assortment of great audio accessories, including earbuds and headphones to immerse yourself in anything but what's happening around you; and Bluetooth speakers to build a blazing hot wall of sound between you and everyone else.

Tough tactics? Sure. But these are tough times…and we all have to be prepared.

There are loads of convenient affordable earbuds that can help make the world go away — for a few minutes at a time, at least. The Skullcandy Jib Wireless Earbuds ($12.99; originally $29.99) help you live wirelessly without sacrificing any essential features — although at over 50 percent off, getting these at less than the price of a quick lunch is probably their most impactful selling point.

Meanwhile, the Crave Octane Bluetooth Earphones ($29.99; originally $49.99) are actually magnetic, up and running when they're disconnected, powered down and conserving energy when the buds are stuck together. And the newest version of the best-selling AirSounds Pro True Wireless Earbuds ($34.99; originally $129.99) have a new and improved design, seamless connectivity, and battery life status updates every time you connect.

Beats Tour 2.5 Wired In-Ear Headphones ($47.99; originally $59.95) are built for function and durability in our busy world, engineered with a variety of fit options for all-day comfort and sweat and water resistance to easily shrug off all your life throws at them.

The EarFun Free True Wireless Earbuds ($49.99; originally $79.99) sports built-in 6 mm graphene drivers and are powered by the most advanced Bluetooth 5.0 protocol, which dramatically enhances their stability and connection. And the Skullcandy Sesh True Wireless Earbuds ($49.99; originally $58.99) offer up to 10 hours of battery life and a noise-isolating fit, comfortably sealing out ambient sound to keep your music pure.

Beats takes pride that their UrBeats Wired Earphones ($51.99; originally $59.99) are designed for optimized sound output with laser-precision venting for micro-pressure balanced bass while dual-chamber acoustics deliver synchronized sound and natural tonality across all types of music.

The Marshall legacy remains strong with the Marshall Mode EQ Wired Earphones ($54.99; originally $99.99), Their customized drivers are fitted into Mode EQ's tiny frame to produce a well-balanced audio that boasts a clear midrange, extended highs, and deep bass with an EQ switch on the remote allowing you to customize your sound even more.

The HUB Hi-Fi Wireless Noise Cancelling Earbuds ($71.99; originally $250) are not only weatherproof, but feature wireless charging and ambient noise-cancelation. And with its extremely powerful charging bank, you'll get up to 100 hours of on-the-go listening.

As for the Skullcandy Indy True Wireless Earbuds ($83.99), its sound profile is tuned to deliver crisp highs and warm lows without distortion. You can change songs, adjust volume and manage calls just by tapping them.

Earbuds can pack a punch, but if you truly want to sink into the music, a pair of enveloping over-ear headphones can't be beat. And if you're trying to stick by the reliability of the big brand names, they don't come bigger than a pair of renewed and new open-box headphones from Sony.

With the Sony Over-Ear Wireless RF Stereo TV Headphones (Renewed) ($29.99; originally $88), you get wireless, noise-reducing home headphones that deliver high quality and detailed sound with a range of up to 150 feet.

Meanwhile, the Sony ZX220BT Wireless On-Ear Bluetooth Headphones (Open Box) ($34.99; originally $79.99) let you hear more of the detail in all your favorite songs thanks to 1.18" dome drivers, all ina swivel founding design, you can fold these up and take all these features anywhere you go.

Audio-Technica developed their first set of headphones in 1974 — and since then, the Japanese company has been one of the preeminent names in headphone technology. That tradition lives in the Audio-Technica ATH-ANC70 QuietPoint Active Noise-Cancelling Headphones (Certified Refurbished) ($49.99; originally $60), a lightweight, compact unit that reduces distracting background noise by up to 90 percent, while accentuating the superior audio quality that has made Audio-Technica a worldwide leader.

Finally, the Audio-Technica ATH-SR6BT Wireless Over-Ear Hi-Res Headphones ($101.99; originally $169.99) are the best of both worlds, featuring up to 30 hours of wireless listening via Bluetooth or an optional wired connection for the more traditional headphones experience.

The EVEN H4 Wireless Headphones with EarPrint Technology ($139.99) has a lot of fans, including reviewers at The Verge, AskMen, TIME, Techaeris, Engadget, and Wired. The EVEN H4s have their patented EarPrint technology, which actually maps the way you hear, adapting music to your unique hearing profile so you never skip a beat or miss a note.

Skullcandy bills their Crusher ANC Personalized, Noise Canceling Wireless Headphones ($249.99; originally $318.99) as the most immersive headphones ever made. Their broadest range of Sensory Bass yet with new, patented drivers, you can easily adjust elements up or down based on your preference. Meanwhile, the Active Noise Cancellation scrubs outside noise and the Skullcandy app helps you create a personal sound profile, optimizing audio levels so you hear the music just the way you want it.

Of course, if you want to share the music, it's time to start checking out Bluetooth speaker options that can pound out some serious power.

At just three inches, the Crave Curve Mini 5W Bluetooth Speaker ($34.99; originally $49.99) is adorable, yet capable of some belting it out just like larger models. With up to 10 hours of playback, this innovative portable speaker provides gorgeous clarity and deep, thumping bass with a wide range thanks to dual sound drivers.

With the dual sync capability of the TikiTunes Bluetooth Wireless Speaker and Ambient Light ($39.99), you can connect a pair together for true stereo sound, even when they're up to 30 feet apart.

The Sodapop Bluetooth Bass Bottle Speaker ($44.99; originally $49) took an innovative approach to the main problem of small portable speakers: low-frequency bass and diminished sound. This actually connects to its own carrying case or even a suitable sized plastic bottle and immediately, your bass shoots up 10 decibels — basically twice as loud as before.

You know the EarFun UBOOM Portable Bluetooth Speaker ($49.99; originally $59.99) from its iconic cylindrical design, packed with two full-range 45mm drivers, dual passive radiators, and an advanced DSP algorithm to deliver immersive, stereophonic audio that radiates evenly in all directions. It can also stay submerged in up to 3 feet of water for up to 30 minutes and survive just fine, making it a natural for pool parties.

Lightweight, compact and portable, the Crave Curve 20W Bluetooth 4.2 Speaker ($67.99; originally $99.99) is easy to take with you wherever the party starts, serving up gorgeous clarity and deep, thumping bass with a wide range thanks to dual sound drivers with 10 hours of battery life.

The Harman Kardon Allure Voice-Activated Speaker ($129.99; originally $249.95) connects to Amazon Alexa via dual-band WiFi and turn her into a full-throated beast.  The speaker's 360-degree sound fills up the room while the bass thunders from the built-in subwoofer, all while the responsive lighting animates the semi-transparent body for a striking design element.

At 110 decibels, the equivalent of a car horn from three feet away, the Marshall Woburn Bluetooth Speaker ($269.99; originally $599.99) will never want for power. This speaker hits high trebles cleanly, handles low bass with ease, and has a clear and lifelike mid-range. Plus, you can't beat the Marshall name — or the savings of more than $300, over 50 percent off.