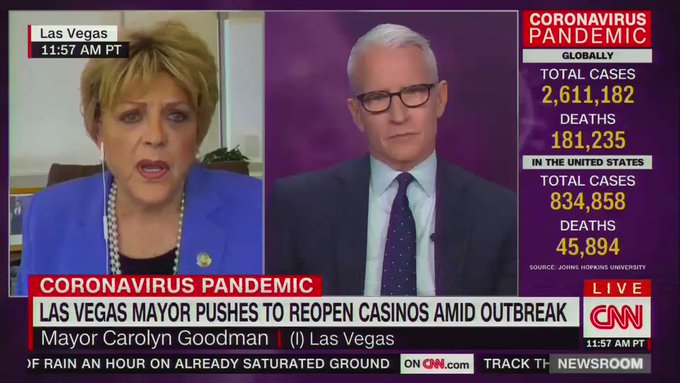 You might say she was willing to gamble with their lives.

It's been quite a week for politicians saying awful things that reveal how little they care about the human beings they govern. Latest case in point, the mayor of Las Vegas.

In this CNN clip with Anderson Cooper, Mayor Carolyn Goodman of Las Vegas, Nevada offers her city as a “control group” -- she says, "we offer to be a control group" (!!!) -- to find out how many people will become infected with coronavirus and die without social distancing.

She is a supporter of impeached president Donald Trump, who is pushing states and mayors to lift social distancing guidelines. Trump is also tweeting erratic commands to his armed supporters about liberating states, and it's all very weird.

Las Vegas Mayor Carolyn Goodman calls for businesses to reopen, while saying she won't provide social distancing guidelines on how to do so safely.

"They better figure it out. That's their job. That's not the mayor's job." https://t.co/lx4A6WuB0P pic.twitter.com/fEedR19LYX

The brouhaha over her televised comments may be for naught -- there are reports she has no such jurisdiction, anyway.

The Las Vegas Strip is not in the City of Las Vegas.

She is the mayor of the City of Las Vegas, not the Las Vegas Strip.

Turns out the mayor has no control over the Las Vegas strip.
From @ThisAlexTin: "City of Las Vegas doesn't actually have any jurisdiction over the Las Vegas Strip. Plans to reopen from casinos anywhere in Nevada can only be approved by a state control board, per the governor" https://t.co/OIMLv25Kus

More from reporters trying to make sense of it all, below.

Las Vegas Mayor Carolyn Goodman says her city should reopen, including casinos. Asked by @andersoncooper how she would recommend casinos maintain social distance, Goodman: “I’m not a private owner.” She said it’s “alarmist” to raise concerns about spread of disease by reopening

One might say the Las Vegas Mayor is, ahem, gambling with her constituents lives

Las Vegas Mayor offers city as "control group", "we offer to be a control group" to see how many people die without social distancing. pic.twitter.com/NESE2hActE