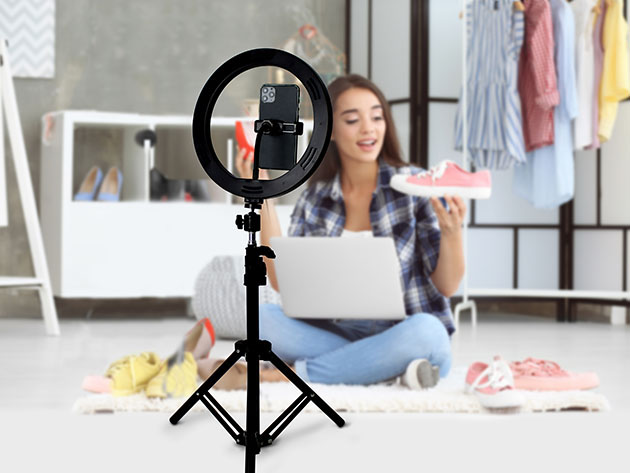 From national and local news anchors to Ellen Degeneres, from Saturday Night Live to the all-star Together At Home concert, we’re learning another new reality of our 2020 entertainment world: everyone has their own home production equipment these days.

Granted, it’s often just an iPhone, a mic and some extra lighting, but the shuttering of Hollywood and most television production has sparked a whole new DIY-driven aesthetic across our screens — and even now, it doesn’t take a lot anymore to make even your own home vlogs look right on par with Jimmy Fallon or Anderson Cooper.

In fact, you can take a big step toward having all the pieces of a brilliant home video hub with the U-STREAM Home Streaming Studio with 10" Ring Light and Tripod package.

It all begins with an adjustable tripod stand grips your phone to capture just the right shooting angle. The stand extends from 18 up to 52 inches, allowing you to maneuver into the position that best fits the physical demands of your environment. The phone holder also features a non-slip rubber grip, so your device stays locked in during streaming.

Of course, no video looks good without the proper lighting, so your phone and stand are also haloed by an all-purpose 10-inch ring light. Equipped with three distinct lighting options — white, warm yellow, and warm white — you can fire up this ring light and get just the right amount of fill, shadow, and ambiance for a perfect shot.

The entire kit also comes with its own remote control, allowing you to switch between your 10 different brightness levels with a press of a button. And the entire assemblage is USB powered, so after plugging into a standard USB port, there are no batteries required ever.