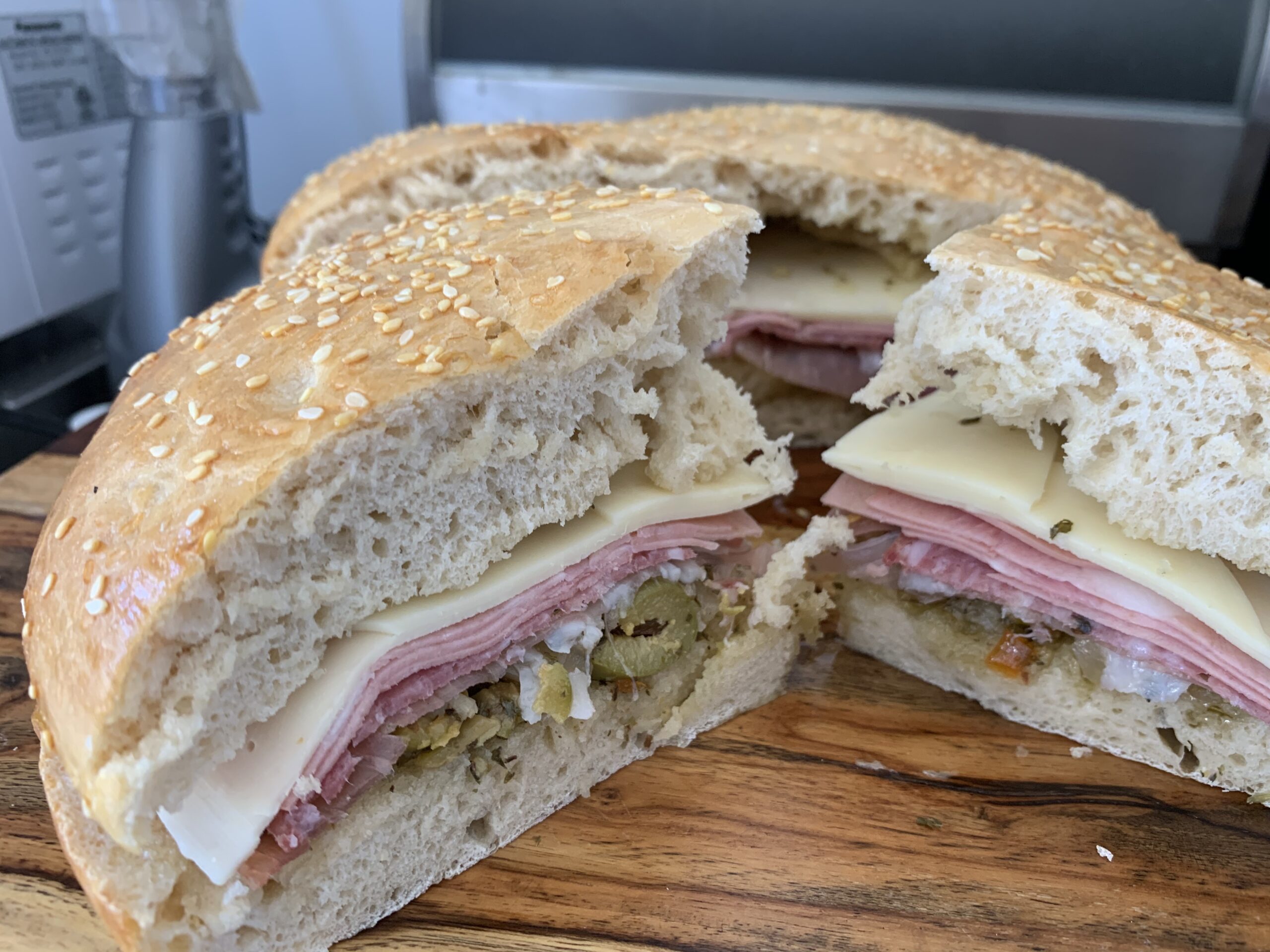 The Muffaletta, as created and prepared by Central Grocery on Decatur in New Orleans, is my second favorite sandwich on earth. I recently spent a week in New Orleans trying Muffaletta at various locations to see if I might possibly like one better than the OG sandwich sold across from the French Market. I could not.

While the location may be part of the experience, and I certainly do love sitting at a counter in the back of Central Grocery, drinking an Abita Amber and enjoying a Muffaletta with Zapp's Voodoo Heat chips, I figured I could make this sandwich at home.

The ingredients are commonly available. Mostly the sandwich is made of cured meats and cheese, the tricky parts seemed to be the olive tapenade and the bread. Bread? I figured I could handle the bread, and when I saw the olive salad available for sale online...

You are going to need about 36 hrs for this one.

Mix all the starter ingredients in a medium-size bowl, cover and set on your counter overnight.

Combine the dough ingredients with your starter in a large-size bowl, or your standing kitchen mixer if you have one. I find it is a lot easier with the stand mixer. Once you have a smooth ball of dough, let it rise for about an hour. I have been told lard is more authentic than shortening, but I do not have any.

Punch down that ball of dough, fold it a few times and make it a ball again. Let rise 2-3 more hours. Punch down again and shape into a ball. Let sit about 10 minutes, til the dough becomes more workable again, and shape it into your round platter shape.

IMPORTANT: You want this disc to be flat! The shaped load should have a very slight concave shape on top. When the loaf bakes and rises if there is an upward slope the center will be thick and the sandwich hard to bite into!

Place the disc on a baking sheet. Cover the disc with lightly oil-sprayed plastic wrap, and then refrigerate overnight.

In the morning remove the round from the fridge and pre-heat your oven to 350F. While the oven is coming up to temp beat that 1 egg into the ½ cup of water and brush the top of the round with it. Then sprinkle with sesame seeds.

When the oven is warm and the seeds affixed, bake the loaf for 30 minutes.

Let the loaf completely cool, 3-4 hours, before cutting for the sandwich.

Use the olive oil from the jar of Central Grocery olive salad to coat both sides of the round. then spread the salad on the bottom ½. Layer the meats and cheeses on top of the olive salad to your liking. Put the top back on and cut in quarters.

The people with whom I shared this sandwich described it as 'delicious' and 'on the greasy side. I felt it was still a bit bready and I need to push the round out a bit thinner.