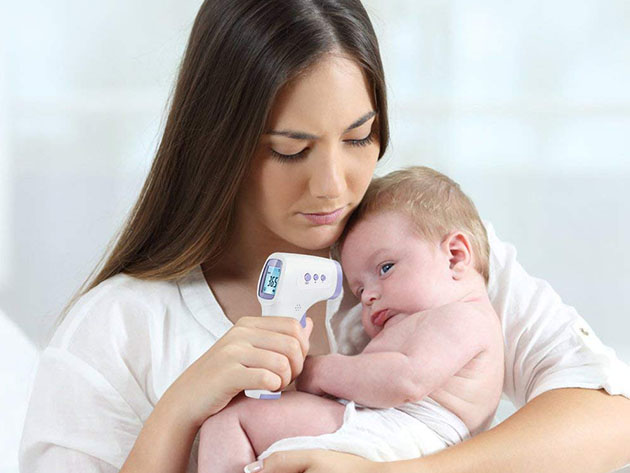 Take a long, hard look at your medicine cabinet. Does it have everything you need, or is it a mess of old tools and containers whose contents may or may not have expired five years ago?

It's important to make sure you have the essentials, like a reliable, digital thermometer — and preferably one that won't end up covered in possible contaminants and other bacteria. If you're building your medicine cabinet, an infrared non-contact thermometer like this one from GLiving is a must.

Just aim the infrared sensor at your target and you'll get instantaneous temperature readings in under one second. This instrument never needs to make physical contact with the subject, so you can get your readings from a distance.

The unit has a large, backlit LCD display to allow its findings to be read even in the dark, making it a perfect instrument for checking on a sleeping baby or small child without waking them up.

Programmed for both Fahrenheit and Celsius readings, users can also program the thermometer with a pre-set alarm to alert you if the reading should rise over a certain temperature.

Even if you aren't worried about anyone's current medical condition, this thermometer does double-duty in its secondary object mode, reading the temperature of a room, an object like a cup or bowl or virtually anything projecting radiant heat. Just point and click and you'll know just how hot that cup of coffee really is before you try to drink it. The whole thing even shuts off after 15 seconds of inactivity, so no worries about a dead battery after leaving it on too long.

Regularly $149.99, you can get this one-touch digital thermometer for almost half off the retail price, only $79.99.