This vacuum is cordless, provides 40 minutes of cleaning per charge—and it's on sale 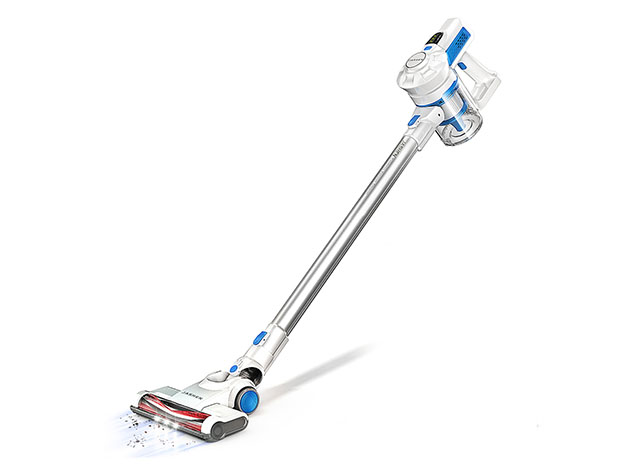 For those still plodding along with some ancient, plug-in, standup vacuum cleaner like your parents used to use, you need to step into modern society.

Look, we’re not even trying to talk you into programmable, autonomous vacuum bots or anything. We’re just talking about upgrading to a modern, proficient multi-purpose cleaning tool that handles all your business efficiently and doesn’t make you look like you should be tidying up in the Brady residence.

By that criteria, the JASHEN V12 Cordless Stick Vacuum can definitely help you ditch the old Hoover and start cleaning up to 21st century standards.

The JASHEN has a built-in 180-watt motor that serves up to 40 minutes of cordless vacuuming so you can deep clean the whole house on a single charge. The upgraded motorized brush works with the JASHEN's power suction to thoroughly pick up anything you don’t want on your carpets and floors, from pet hair and dirt to debris and tough-to-handle messes.

It’s also packing a high-efficiency filtration system with a washable filter and an extra hygienic HEPA filter that locks in small particles with no leakage, trapping filter dust while expelling only fresh, purified air.

Also unlike the old-school models, the JASHEN easily converts from the traditional stand-up configuration to a handheld vac, capable of cleaning furniture, upholstery and even ceilings. And at less than 7.5 pounds, it’s light enough for just about anyone to maneuver simply.

As another plus over the old-style vacs, the JASHEN also runs super quietly, applying even more suction and power as models from back in the day, all without sounding like you’re pushing an aircraft carrier through your living room.

And hey, no cord on the JASHEN, so now you can take it to every corner of the room without worrying about yanking it clean out of the wall.