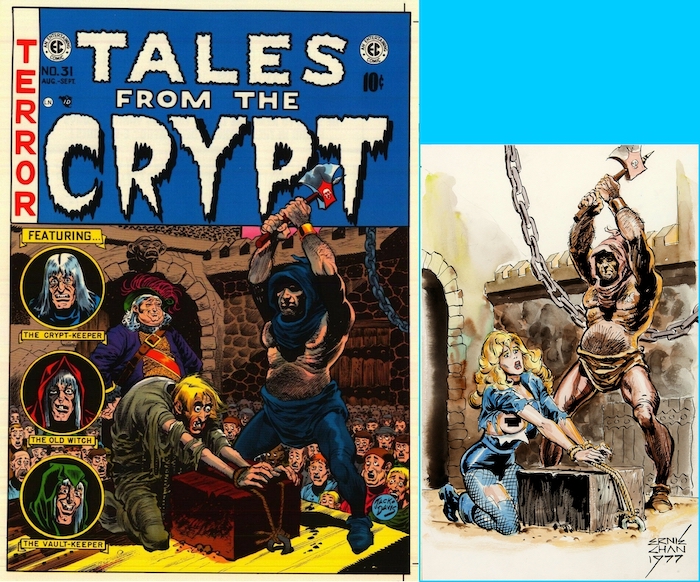 A friend of mine (who wishes to remain anonymous) shares my interest in finding swipes of famous illustrators and comic book artists. Neither of us begrudge these artists for swiping (that's the comics industry term for using reference material perhaps a bit too faithfully). After all, these artists worked under brutal deadlines and sometimes they had to cut corners to meet them. Here's a recent swipe he shared with me:

This swipe is by lesser known artist Ernie Chan. As you can see, he literally traced the scene from Jack Davis and EC Comics' Tales from the Crypt #31. He lived and worked in Oakland and I met him at a few conventions. This is a commission by a fan who wanted a sexy Black Canary.

Chan was a popular freelance artist who inked John and Sal Buscema in the early 70s before going on to solo runs with Conan the Barbarian for Marvel and Batman and Captain Marvel for DC.

I find it interesting that Chan did not even bother to alter the source image (reverse it, repose the actors, etc) but I guess no one in 1977 would believe the internet would exist which would make instant cross checking possible.

I look forward to the inevitable comment that comes with my posts about interesting swipes: "It's just a coincidence. There are only a limited number of poses a human body can make, and this is a common one."