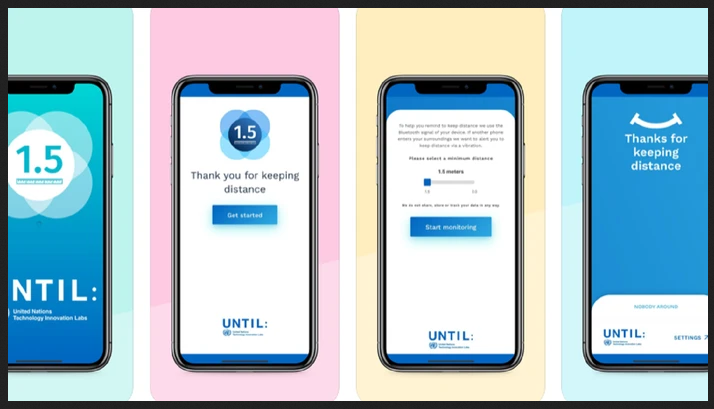 Motherboard reporter Joseph Cox took a close look at the app, and found that “doesn’t perform the most basic of tasks.”

“We tested the app on multiple phones. It didn't detect them even when well within range. Literally does not do its one job.”

When users download 1point5, the app is supposed to alert them when another Bluetooth device comes within 1.5 metres of their own phone, or a user can choose to increase the range slightly. The app is then supposed to display a message saying "Please keep your distance" if it detects other nearby devices.

But when Motherboard downloaded the app earlier this week before the UN's official announcement, the app didn't even successfully perform this most basic of actions. Motherboard tested the app on two separate Android devices, and held them next to other phones with Bluetooth enabled. The app did not detect any other devices in either test.

Multiple other users appear to have encountered the same issue, according to reviews left on the app's Google Play Store page.

"Waste of time.. This application is not working," one apparent user wrote.

The app has another design flaw as well. Independent researcher and consultant Ashkan Soltani noticed the app's description says the software is designed to alert a user to the presence of any nearby Bluetooth device, rather than just phones. All sorts of gadgets use Bluetooth, from Playstations, to computers, to speakers, to smart home and internet of things devices.

"I get that an important part of pandemic response is to help individuals maintain awareness and vigilance in their social distancing efforts—but I'm not sure having your phone alert you anytime you pass by another Bluetooth signal is going to help much beyond annoying people; especially those in densely populated apartment buildings or workplaces," Soltani told Motherboard.

Beyond just not working, the United Nations app also says it scans for *all* nearby bluetooth devices, not just phones, as spotted by @ashk4n. The developer of the app confirmed this to me, saying they will filter in an update (filtering is very possible) https://t.co/dr5MeBfK6L pic.twitter.com/UZJshBhDPO