Reduce exposure to germ-prone surfaces with this tool's brass material 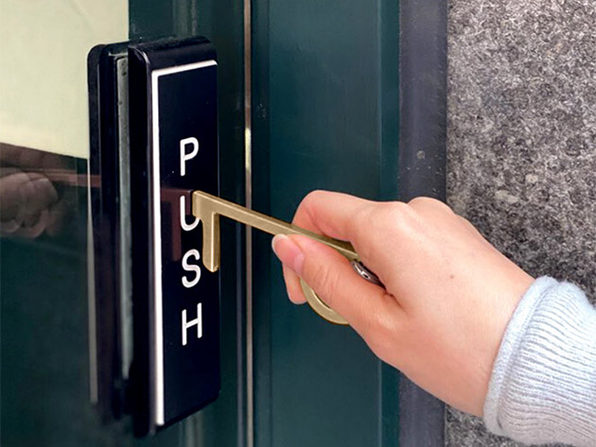 It’s tough to know what to believe with certainty about the insidious nature of coronavirus, mostly because even scientists haven’t determined all the hard and fast rules of this surging illness.

One thing we do know with some assuredness is that cleanliness and avoidance is one of our most important weapons against infection. A recent study found that the virus can survive up to 24 hours on cardboard and up to two to three days on plastic and stainless steel.

But no matter how long the virus can live on a given surface, your risk of infection drops if you just don’t touch those infected objects.

The Safe Finger Hook is a contactless keychain tool that makes sure your exposed fingers actually touch as few doors, handles, countertops, and tables as possible, thereby massively decreasing your chance of contracting the illness.

The Safe Finger is about 3.5 inches long, made of brass, and it’s ergonomically engineered to help you reduce germ exposure.

The Safe Finger is equipped with a door hook, a flat stylus tip, and a finger hole so it can open door handles, pull levers and sliding doors or act as your finger to press touchscreens at the bank, during store checkouts or whenever you need to digitally sign anything on a display.

Not only does a Safe Finger key reduce your direct contact with objects by over 99 percent, but its aluminum construction also resists and reduces bacteria infection by up to that same 99 percent, cutting your risk of infection to essentially zero.

The Safe Finger key comes with a keyring loop allowing you to carry it anywhere so it’s ready for action at a moment’s notice.

Regularly $30, the SafeFinger Antimicrobial Brass Keychain Touch Tool is now available at $21.99 or 26% off the regular price.