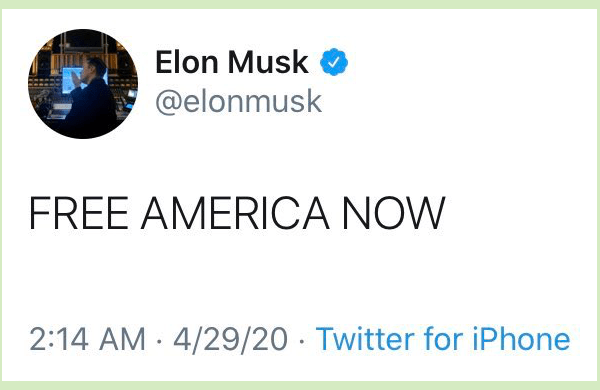 Bloomberg reported the news first on Friday, citing an email from the company to its staff.

Here is a copy:

CEO Musk has been vocal on Twitter and elsewhere about his desire to reopen the Fremont factory, and the rest of the economy, despite the ongoing threat of the coronavirus pandemic.

The move comes a day after California allowed manufacturers in the state to reopen operations, shut due to coronavirus-led lockdowns, which drew an enthusiastic “Yeah!!” on Twitter from Tesla Chief Executive Officer Elon Musk.

Musk, who recently became a father, has been criticizing the lockdown and stay-at-home orders calling them a “serious risk” to U.S. business, even tagging them “unconstitutional” and saying they would not hold up before the U.S. Supreme Court if challenged.

Musk said Tesla aims to restart its Fremont factory on Friday afternoon, according to the Bloomberg report. (here)

Even though the lockdown in Alameda, the county in San Francisco Bay Area where Tesla’s factory is located, is scheduled to last until the end of May. So according to a county order, the Fremont factory is not allowed to operate regularly.

PREVIOUSLY:
'What the f*ck' — Elon Musk coronavirus meltdown on Tesla earnings call, 'Give people back their god damn freedom'

Musk sent this email tonight to Tesla employees saying the Fremont factory will reopen on Friday afternoon. Alameda County is still under shelter in place orders until the end of the month. This will likely cause some problems in the morning. pic.twitter.com/3uHyypE1nL

Read the emails Tesla CEO Elon Musk and HR boss Valerie Workman sent out to US employees. Tesla is asking them to resume ‘limited operations’ and vehicle production Friday in Fremont... via @cnbctech https://t.co/QcYklBEho4

I asked @FremontPD if they could comment on Tesla's plans to make cars with "limited operations" in Fremont today. Is Tesla in compliance with local Covid-19 orders? FYI here's what I asked them. (And read the Tesla HR email to employees over @CNBCtech) https://t.co/QcYklBEho4 pic.twitter.com/W1MjdY3F5F