The world’s most portable solar oven, the Go is as ultra-resourceful as it is compact 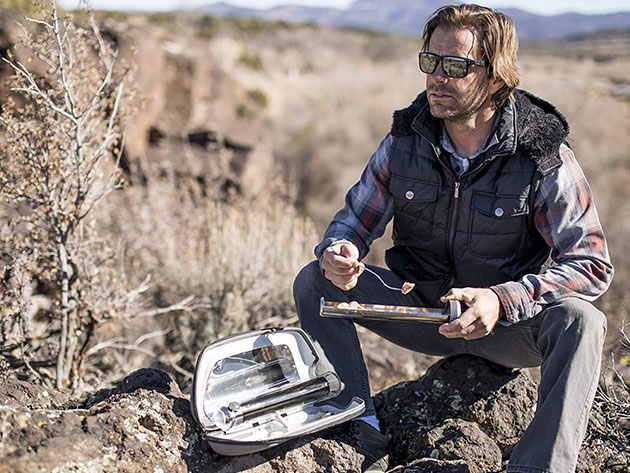 The sun has a core temperature of 27 million degrees Fahrenheit. So if your oven only needs to reach 425 degrees to cook a chicken or some potatoes and veggies, why can’t the sun just handle your kitchen duties when an oven isn’t viable?

It can. And solar ovens that channel the sun’s rays into solar energy for backyard barbecues, weekend camping trip feasts or just to boil water in an emergency are easier than ever to use. That goes double for the Go Portable Solar Oven, which maker GoSun bills as the most portable solar oven ever.

And considering the Go clocks in at just over a foot long and only weighs about two pounds, that’s a hard claim to argue. Yet despite its size, the Go is a beast, capable of generating temperatures up to 550 degrees, all from the power of the sun, to bake, roast, steam, or boil virtually anywhere.

In case you’re worried, this is actually an all-weather oven, meaning you can reach cooking temperatures even with rain, clouds, and snow in the forecast. Basically, if you can see a shadow, the Go has even rays to cook.

Just dice and prepare your food on to the foot-long cooking tube, slide it into the heart of the Go, adjust your cooking reflective surface “wings” to capture the best sun angle and 20 to 45 minutes later, you’ll have fully cooked delicious meals, all without toting any gases, fuels or other heating elements around.

The Go is also a winner for beverages, brewing coffee or tea; or for sterilizing water for cooking or drinking.

Considering around 1 billion people don’t have access to electricity and over three billion still cook on dangerous, polluting stoves that run on dirty fuels like wood, charcoal or petrochemical flames, the Go is a perfect eco-friendly way to not only cook up a great tasting meal but also strike a blow for the environment at the same time.

Regularly priced at $139, you can save $20 right now by picking up a Go Portable Solar Oven through this offer at just $119.