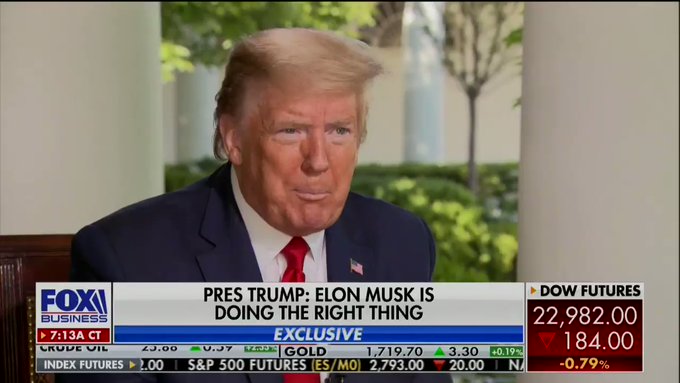 “Look, there's nothing good about what happened with the plague, okay? Especially the death. But the one thing is, it said, ‘Trump was right,’” the president, referring to himself in the third person, told host Maria Bartiromo of Fox Business.

“Look, there's nothing good about what happened with the plague, okay? Especially the death. But the one thing is, it said, ‘Trump was right,’” the president, referring to himself in the third person, told host Maria Bartiromo of Fox Business. https://t.co/F1o0vYZsl5

The economy is a mess, and Trump addressed this, too, in a very Trumpy way.

Nearly 3 million more Americans filed unemployment claims this week, the Department of Labor announced today, and 8 straight weeks of job losses from the coronavirus crisis now total 36 million. It's a bloodbath out there and many Americans are suffering with unemployment and no job prospects or government subsidies in sight.

BARTIROMO: But now, we’ve got 33 million people filing for unemployment. We’ve got 20 percent --

There were truckers honking horns, too.

There were honking horns during Trump's interview with Bartiromo.

T: "You know what that is?"
B: "Trucking protesters."
T: "They're not protesters, they're supporters of me."

They're protesters. They chanted "we want Trump" *to get a meeting with Trump.* https://t.co/OdXGHrHUPJ