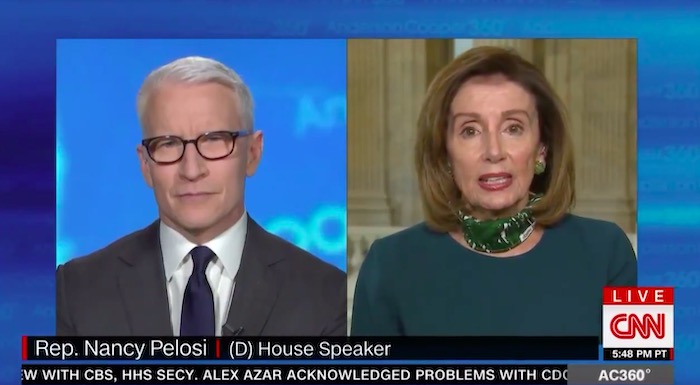 “I would rather he not be taking something that has not been approved by the scientists, especially in his age group, and in his, shall we say, weight group: ‘Morbidly obese,’ they say,” says House Speaker Nancy Pelosi on Pres. Trump’s revelation he is taking hydroxychloroquine. pic.twitter.com/0ImjpEjg9q

Pelosi’s concern is grounded in the president’s medical records. During his checkup last year, Trump measured 6 feet, 3 inches and weighed 243 pounds, which would qualify him as obese, according to the National Institutes of Health.

The NIH’s body mass index measures above-normal weight in the overweight and obese categories. Trump’s reported measurements would give him a BMI of 30.4, and the NIH considers anything above 30 as obese, but its index does not list a separate range for morbid obesity.

The president is also 73 and in an age bracket that puts him at greater risk. The Centers for Disease Control and Prevention have warned older adults to take increased precautions as cases of the coronavirus spread around the nation, and preliminary studies released last month found obesity may be a predictor of severe coronavirus illnesses.

Trump continued to claim on Monday that hydroxychloroquine would be a boon for Americans, telling reporters they would be “surprised at how many people are taking it.” He has reportedly pushed health officials to direct federal funding to hydroxychloroquine studies.