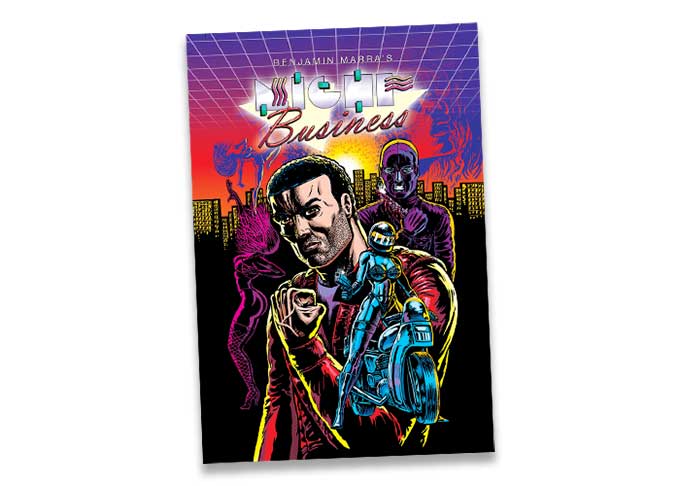 This interview presents a conversation with Grammy-nominated comic book creator, cartoonist and the future of comics history, Benjamin Marra (TERROR ASSAULTER: O.M.W.O.T. (One Man War On Terror), NIGHT BUSINESS, AMERICAN BLOOD, BLADES & LAZERS) about his work, comics, and new daily strip, WHAT WE MEAN BY YESTERDAY.

Jeffery Klaehn: For audiences new to you and your work, how might you describe your “brand” as a comic creator, Ben?

Benjamin Marra: It’s difficult for me to self-assess my own brand. Probably easier for an external set of eyes to make a more accurate accounting. But I’d describe myself as a creator focused on genre and manipulating or subverting genre tropes. The themes of my work revolve around ideas of America and American Pop Culture. As a brand I’m a bit of a provocateur and permanently stationed on the underground side of comics. I’d say my comics are Gonzo comics that stem from the creative, subversive attitudes of the 60s and 70s.

JK: When you think about your own passion for comics and comic art, what immediately comes to mind for you?

Ben Marra: Drawing with ink and telling stories. Those are two things that I obsess over practically every minute of the day.

JK: I was thinking today that mainstream comics should be available in magazine size format at 100-page each, on slick paper, maybe for a $7.99US or $8.99US price point. Some could perhaps be printed on lower quality paper and offered at cheaper prices. And all could be distributed via comic shops, newsstands, and digitally, simultaneously. I’m thinking back to how popular the magazine format was in the 1970s and also of those great monthly Shonen Jump print anthologies I used to be able to pick up on late night trips to local supermarkets.  What are your thoughts about formats and distribution of comics today, Ben?

Ben Marra: I agree with your vision of a comics magazine, except it should be printed on cheap paper to bring the cover price down as much as possible. It’s the stories that are important, not the paper stock. As far as my thoughts on distribution, I love the floppy monthly pamphlet as a vessel for serialized stories. But I think the Big Two have undermined its effectiveness with their business practices. I think the pamphlet comic should cost less and be found in as many retail spaces as possible. I guess I’m describing what it was like to buy comics back in the 70s and 80s. Maybe it’s foolish to think we can’t go back to that place. But I think there are subscription models that Chuck Forsman and Michel Fiffe have employed that are successful with a 24-page pamphlet comic. I don’t have blinders on for pamphlets however. Longform comics appear to be the future (if not present) of successful comics formats for distribution. And I’m all for webcomics. I’ve been doing a daily strip on my Instagram and I think it’s how I will create all my comics going forward. Any distribution method that doesn’t solely rely on the graces and professionalism of Diamond is a step in the right direction.

JK: How do you approach promotion?  I love your video trailer for NIGHT BUSINESS.

Ben Marra: Thanks! My approach to promotion has been based around this alternate-version character of myself. I take author photos for the back of my comics where I pretend to be this insane, out-of-touch guy who’s creating these stories. People really connect with those author photos. Sometimes I think they like the author photos more than the comics. With the videos I’ve made I’m trying to expand on that character a little more. I want to get across a bit of the Gonzo flavor I think my comics have. I want to give people a taste of that with the video ads I’ve created. I want the ads to support the overall feel of the “brand.”

JK: Looking at your body of work to date, what works are you most proud of?

Ben Marra: It’s difficult to say because I’m a harsh critic of my own work. But I am proud of comics I made that felt like uncertain experiments in the moment of creation but now seemed to have all the pieces fall into place. RIPPER & FRIENDS and TERROR ASSAULTER: O.M.W.O.T. (One Man War On Terror) worked as comics, though there are parts of them I’m not happy about and would change if I could.

JK: How fast or slow do you typically work?  Do you have specific ways of working?  What inspires you to “create”?

Ben Marra: My process changes from project to project. But if I’m working on my own stuff, I usually develop a story idea and create an outline for it as fast as I can to preserve it. If I’m actually making it into a comic I’ll draw out some page layouts. At least that’s what I used to do until I started doing a daily strip – with that I go straight to pencils. I pencil as minimally as possible, just enough lines of information to hang the inks on. I ink as fast as possible. I like to think I ink like I’m creating a 24-hour comic. I keep trying to get faster. Speed is essential to me. For my daily comic it’s possible for me to create 14 pages in two or three days. But I don’t get to work on it for prolonged stretches due to my other commitments. I have a specific range of ways I work I would say. What inspires me to create are looking at the works of creators whose work inspires me to draw and hearing stories that cause me to think of my own stories in turn. Or it could be the feeling of art and stories I encounter that inspire me to try to replicate that same feeling in my own work.

JK: Please tell me about TERROR ASSAULTER: O.M.W.O.T.  In what ways is the narrative thematically conversant with power?  What influenced the satirical elements, your story, and overall design of the comic?

Ben Marra: The book is a satire of American action movies and Neocon foreign policy. It’s also a satire of the way masculinity is portrayed and defined in pop culture. All of those things are based on examinations or demonstrations of power. So you could say O.M.W.O.T. is a satire of what power is, what it means. Obviously action movies were a huge influence on me when I created O.M.W.O.T. The title is obviously a nod to Jack Kirby’s OMAC comic book series. I love action movies but I love how ridiculous they can be even more, particularly those from the 80s. The overall design of the comic was influenced by classic comics and printing techniques from the 40s on through the 80s, before digital coloring became the standard. For me the goal was to tell an interesting, compelling, and entertaining story above all else.

JK: What’s on your comic bucket list, looking toward the future?

Ben Marra: I would love to complete my daily strip, WHAT WE MEAN BY YESTERDAY. But I have a feeling it will take me the rest of my life to do so. I’d love to see it printed into volumes to put on a shelf. At first it was designed to serve two purposes: 1. Allow me to experiment with a new, faster, more economical, cartoony drawing style. 2. Give me an outlet to tell my own stories while still working on other projects that actually pay the bills. Doing a daily strip is perfect because I get something done for each day, but doing four to six panels a day isn’t a huge ask either. If I didn’t do something I was never going to get a chance to tell all the stories I have in my head. The strip itself is about a high school in a suburban American town. All the characters in the strip are connected to the high school in some way. The first character we meet is a teacher, Bruce Barnes, and the first part of the story follows him during a particularly bad day he’s having. But the strip is going to branch out in ways that will be unpredictable to readers. I’m excited for them to see where it goes.  Anyone interested in checking it out can view it on my Instagram account where it’s free to read, @benjamin_marra.

I’d also like to help facilitate the adaptation of one of my comics into a film or television show.

JK: What’s the most gratifying part of being a cartoonist and doing what you do?

Ben Marra: When I’m inking and everything is clicking, the ink is flowing, the drawing is fun to make, I feel sure about what I’m working on, and I’m happy to ink the next panel. That’s the most gratifying part. It becomes addictive and you strive to recreate that experience and keep making more.