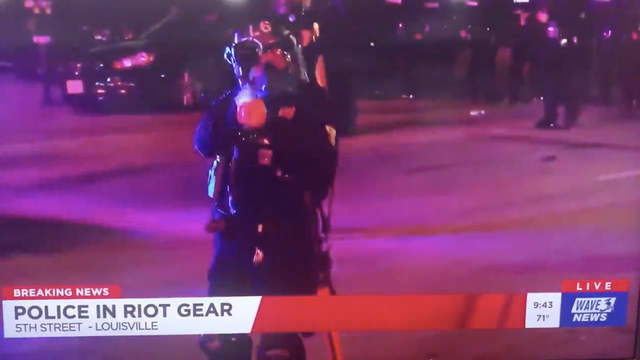 In the footage below, broadcast live by an NBC affiliate and posted to Twitter by Guthrie Graves-Fitzsimmons, a news crew moves into the street near a line of riot police. Protestors are not nearby in significant numbers and the police are not engaging them. A cop steps forward from the line and opens fire on the news crew with what appear to be pepper rounds.

Video of the encounter shows Kaitlin Rust, a reporter for CBS affiliate WAVE 3 News, narrating as she walks around the area of the protest before suddenly screaming: "I'm getting shot!" Rust appears shocked but continues reporting, explaining what's happening as the camera focuses in on an officer pointing a gun with pepper bullets at the cameraman. ... The incident took place as police were reportedly trying to clear the area of large groups of protesters. It is unclear why the police chose to open fire on the reporters.

When policing is this violent and contemptuous of constitutional rights, it seems pointless to single out specific aspects of the problem. The shooter's immediate goal for opening fire on the news crew is stop the filming. He didn't get what he wanted, but he won't face any consequences, either.