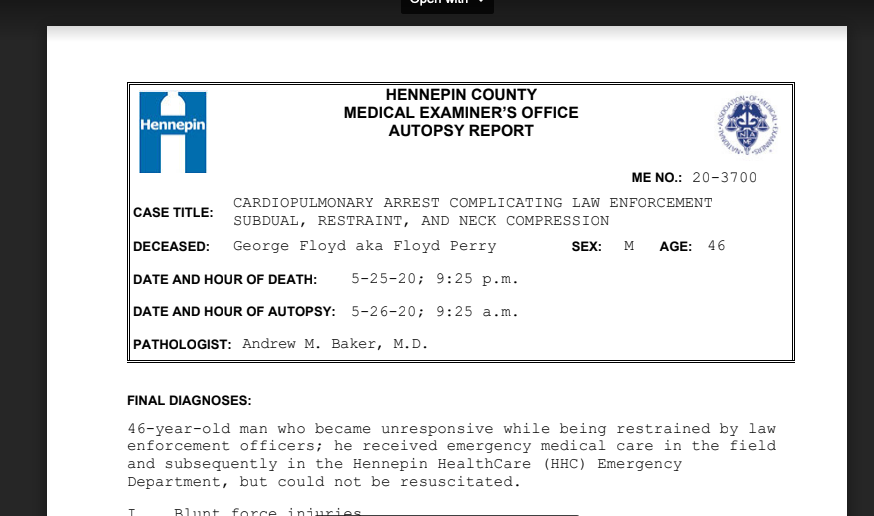 An autopsy of George Floyd, who was killed by police officers in Minneapolis, shows that he'd tested positive for COVID-19 in April, and had recovered -- only to have his life cut short by those who vow to “protect and serve.”

You can read the autopsy here, on the Hennepin County government website.

Excerpt from the Star-Tribune:

Also disclosed by the report was that Floyd tested positive for COVID-19 in early April, although the autopsy did not cite that as a factor in his death.

“Since … positivity for [COVID-19] can persist for weeks after the onset and resolution of clinical disease, the autopsy result most likely reflects asymptomatic but persistent … positivity from previous infection,” the report said based on the autopsy performed by the medical examiner, Dr. Andrew Baker.

Floyd repeatedly told officers that he was unable to breathe while he was restrained before he lost consciousness and died. A concern with SARS-CoV-2 infection is that it can cause scarring in the lungs that results in lingering respiratory problems and shortness of breath. However, doctors worry more about that long-term problem in severe COVID-19 cases that require hospitalization, and doctors expect that patients with asymptomatic cases will fully recover. It can take weeks in some cases, though, before X-rays show that lungs have recovered.

The release of the 20-page report comes “with the consent and cooperation of Mr. George Floyd’s family and their legal representatives,” the examiner’s office said in a statement that noted a court order was also needed.

Autopsy reveals #GeorgeFloyd tested positive for COVID-19 in April. He recovered, only to suffocate to death under the knee, weight, and inhumanity of four Minneapolis police officers. Clearest example yet of the #pandemicwithinthepandemic https://t.co/UQxyJVekNq