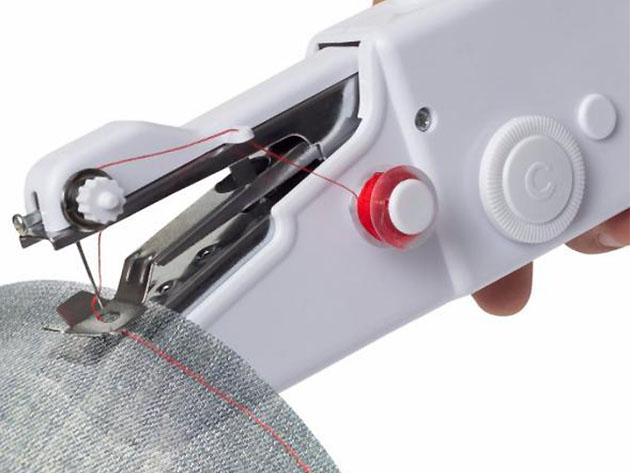 Right tool for the right job. You probably heard a parent or grandparent say it at least once at some point. And it’s true in so many cases.

If you spot a small tear in your living room curtains or near to hem a pair of pants, you can always use the good old fashioned sewing machine. Of course, that means taking the curtains down off the rod or taking off your pants and trying to figure out the right hem.

Rather than bringing material to the sewing machine, sometimes it’s a smarter move to just bring the sewing machine to the material. And since no one wants to lug a 20 or 30-pound sewing machine around anywhere, the Handy Dandy Portable Sewing Machine can handle lots of those quick fix assignments without all the hassle.

This resourceful tool is about the size of a stapler, and at about a foot long, it’s supremely capable of covering simple sewing tasks on the spot, even while your item that needs mending remains in place or even stays on your body.

From bedding to upholstery, this battery-operated mini portable mending machine works on most household fabrics but works especially well on lightweight materials. It’s cordless, so users can move around freely, attacking their projects from all angles. It also makes a great travel accessory to handle any clothing emergencies that might happen while you’re out on the road.

The Handy Dandy machine comes with a thread starter kit and even its own tape measure for on-the-fly quick repairs or temporary basting. It’s also virtually noise-free next to the usual clatter of a big standalone sewing machine.

This super-efficient household repair wizard is regularly $59.95, but right now, it’s over half off that price, on sale for only $24.95.