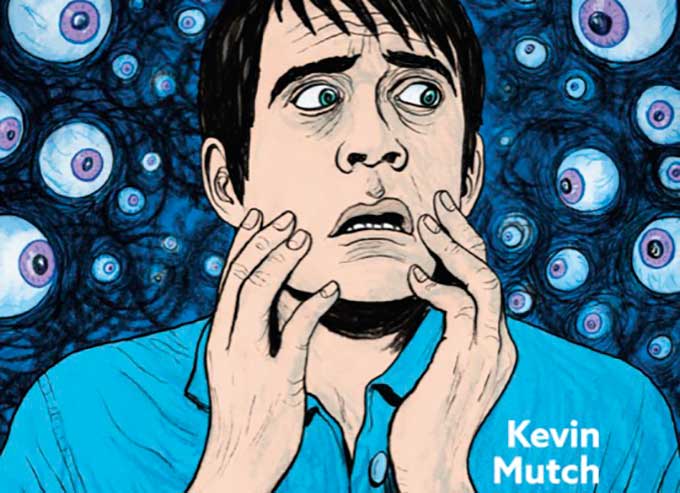 This interview presents a conversation with Xeric Award-winning Canadian cartoonist Kevin Mutch about The Rough Pearl (Fantagraphics, 2020), his new graphic novel which addresses issues surrounding the intersection of class and race privilege in the “precariat” creative communities in and around New York City.

Jeffery Klaehn: Thanks for the interview, Kevin!!  Please tell me about The Rough Pearl.

Kevin Mutch: The Rough Pearl is an autobiographical fantasy — a mixture of truth and fiction in roughly equal parts — about a would-be artist named Adam in New York City in the 1990s. He has a crappy adjunct teaching job, a wife who makes a lot more money than him, and an ill-advised crush on a student. And he seems to be losing his mind — he keeps seeing zombies and aliens and ghosts!

Adam is someone who grew up being told that the world was full of possibilities, but he’s come to see that it isn’t that way anymore (if it ever was). He had all these romantic ideas about being an artist, living in New York, being with beautiful women, and now he realizes all of those dreams have become impossible — until suddenly they all become possible again, all at once.

Unfortunately, he’s been having a harder and harder time determining what’s “real” and what isn’t — either he’s going crazy or he’s bleeding into parallel universes, the book is sort of ambiguous about that, heh — so he has a very difficult time navigating all of this.

The Rough Pearl is also a sequel — to a graphic novel I did about ten years ago called Fantastic Life which was about the same character back when he was a young art student in Canada. That one got excerpted in the edition of The Best American Comics that Alison Bechdel edited, so I always tell everyone that it passed the “Bechdel Test”!

JK: For those who may be new to your work, Fantastic Life won a Xeric Award in 2010.  Are there any plans to make Fantastic Life available digitally, Kevin?

Kevin Mutch: I’m chipping away at an updated version of that story because I can draw better now than I could then, and it drives me crazy to look at it (weirdly enough, I never want to revise the writing part, just the pictures). Anyway, once I finally finish maybe I’ll try putting it out there.

JK: I hope you will. How long did the work take you to produce The Rough Pearl, and what about it are you happiest with?

Kevin Mutch: The Rough Pearl took me seven years from start to finish, which I guess has all sorts of connotations with itchiness and bad luck! It really could’ve been done faster, but I was also working on an adventure story for young people at the same time — it’s called The Moon Prince and a lot of it is online — so it took a while.

I guess I’m happiest that the style I drew in it seems to have worked out okay — I wanted it to have a sort of lived-in New York-y quality and I think it does. I kept thinking of Tom Waits as I was working on it — that “Ninth and Hennepin” vibe (even though that’s in Minneapolis, heh). But mostly I’m just happy to have it finished. I could have done a hundred paintings in the time it took to draw The Rough Pearl!

JK: Your website offers a really wonderful portal into your art and creative process.  Please tell me about the Captain Adam story that’s available there.  It’s quite awesome how one can navigate automatically to the source material(s), just by clicking on each image.  That’s really very cool —

Kevin Mutch: Captain Adam was a “narrative collage” I made in 1991 and it was the first comic I’d made since art school beat them out of me. I was making a lot of “appropriation” art at the time (I still do) which is all about how context changes meaning, and I decided to see what would happen if I made an entire comic book that way (other artists like Chester Brown have tried this too).

So I bought a whole bunch of beat-up old comics at used bookstores, cut them all up with scissors and fished around in the pile with my eyes closed to select a panel, and then more and more panels to see if I could imagine a narrative connection between them all.

When I had 28 pages of collaged panels I redrew and re-lettered them all to smooth over enough of the seams so that readers could (hopefully) follow it. What surprised me then (although it wouldn’t now since so many of my comics do the same thing) was that the collage story I came up with had all sorts of parallels with my own life.

And by the way, since I’m a happily married man who sometimes teaches at art schools, let me just hasten to add that all the boozing, drug-taking and extra-marital student-dating in the The Rough Pearl are completely fictional! It’s the zombies I’m not so sure about.

Art: The cover and interior pages from The Rough Pearl are courtesy of Kevin Mutch.