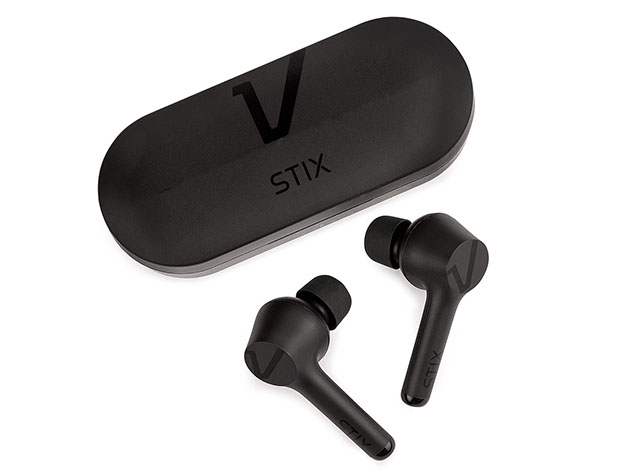 Apple AirPods have become the default earbuds beloved by millions. Unfortunately, they also cost $159, so it’s no surprise that since they were first introduced in 2016, companies have battled to produce comparable headphones at a lower price.

The UK-designed and engineered Veho STIX true wireless earphones may have cracked that particular problem, striking a formidable balance between stellar sound quality and affordability that should make AirPod buyers reconsider.

In a head-to-head competition with all the top flight earbuds on the market, the Veho STIX certainly hold their own, powered by premium audio drivers to deliver a high-end balanced sound. Easy connectable via Bluetooth 5.0, these earphones let you play music from your device at a range of up to 33 feet.

With a water-resistant body that makes the STIX ideal for sports or braving the great outdoors, these headphones also feature built-in smart touch technology, allowing you to easily control your music or hands-free calls.

Meanwhile, the Veho STIX also come with their own rechargeable docking case, offering on-the-go charging that can extend your battery life up to 2 hours before the case needs to be plugged in and recharged itself.

The ergonomically engineered earbuds fit comfortably in the ears, making them perfect gym companions while powering through sweaty, gritty workouts or rugged enough to serve on extended missions outside, even if there’s some weather in the forecast.

Even stacked against their premium audio quality and overall toughness, the strongest endorsement of the Veho STIX might just be their price, which on sale is a far cry from the list price of their Apple competitors.

Right now, you can get a pair of Veho STIX and judge them for yourself at more than 60 percent off, delivering them to you for only $69.99 while this deal lasts.