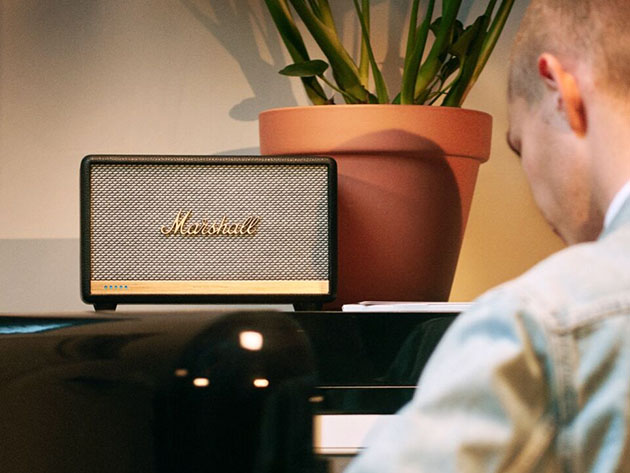 We all love home smart speakers like the Amazon Alexa. But as functional as this home assistant can be, it’s got one nearly indisputable flaw. The Alexa speaker itself just isn’t very good.

Oh sure, for voice commands or asking questions or trying to order a pizza, the fidelity quality of the Alexa is fine. But once you fire up your favorite music, especially if it’s fueled with heavy bass or demands some serious power, those relatively puny speakers just don’t measure up.

When the music you’re playing through your smart speaker matters, a major-league piece of equipment like the Marshall Stanmore II Wireless Smart Speaker is just the upgrade needed to make your listening epic.

If you don’t trust us, trust the New York Times who called Marshall’s newest tech triumph “big and full of power, and it’s the speaker to get if you want the best-sounding Alexa speaker.”

Before you even fire the Stanmore II up, its classic, wood-grain look in the legendary Marshall style just screams music power.

But of course, it wouldn’t have the Marshall name on it if it wasn’t focused on the sound. This speaker pumps out clean and precise audio even at the highest levels, with advanced components, including a 15 watt Class D amplifier powering its tweeters and another 50-watt amp to drive its mighty subwoofer. Don’t let the compact frame fool you. This is a speaker that can not only fill a room, it can fill a whole house.

And unlike the basic Amazon speaker, the Marshall lets you fine-tune the tunes, adjusting the volume, bass, or treble both through voice commands, the analog controls on the speaker’s top panel or even through a built-in equalizer in the Marshall Voice app.

Meanwhile, with all that Amazon Alexa brain power built-in, the Stanmore II will do everything you expect from Alexa, including all the standard voice requests or as a hub to control an entire smart-enabled home.